If you’ve been to Hart House, then one-stop-shop – or as I prefer: half-Hogwarts-half-funhouse – will make perfect sense. This is the place on campus that offers everything from the arts, to recreation, sports and debate in one place. They call it the living laboratory, and it is exactly that.  I don’t know of any other place where you could see a play, proceed to a Ukulele lesson and then embark on an exciting game of squash. Oh, and when the screeching wails of your neglected readings finally reach your stubborn ears, there’s a library there too! Did I mention the free cookies and tea Craft Thursdays, free massages and free documentaries? I know, I’m throwing a lot at you, but it’s all in one place. Beyond everything that Hart House has to offer, it personally helped me get so much more involved with campus. I first started blogging with Hart House, and it was my first time blogging with a professional platform. By professional I mean, you know, beyond an emotional teen tumblr full of Carrie Bradshaw quotes & pictures of cupcakes.  The blogging became a healthy outlet for when my anxiety, and the times I felt like I was on a one-way trip towards a world of all work and no fun. Eventually, I became an an ambassador. From there, I discovered the lovely studios of CIUT FM – fun fact: it used to be the Warden’s apartment – and it’s been cloud 9 ever since.  I’d like to think of it as one of my more rewarding campus courtships. 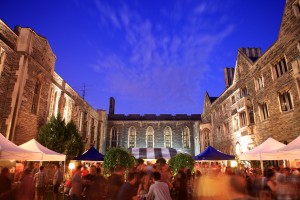 More than anything however, Hart House was the sole catalyst in getting me involved at U of T. I wasn’t very involved in anything at the beginning of first year, classes felt like a complete blur, and I just felt like I was swimming in a small pond amongst very many big fishes. To say in the least, post-high school me was feeling pretty burnt out and incredibly sorry for myself.

I took that walk over during the second semester of my first year feeing absolutely hopeless about everything that had come my way in first semester,  and Hart House really turned things around for me. The way in which it got me involved ultimately led towards a greater road of opportunity, meeting all kinds of people on campus, and helped show me where I had left the the old me again, except this time she was a little older and and the teeniest bit wiser.