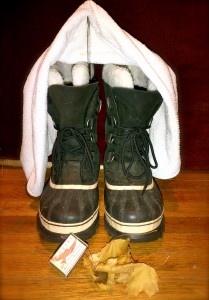 (Couple o boot’s trying to make camp out of a dish towel, some matches and some leaves!)

I was over for dinner at a friend’s apartment the other night and she was telling me about her bootcamp fitness program. I couldn’t help but have visions of my poor friend slugging her gangly way through mud-filled 18-wheeler tires and climbing over 10 foot walls, all the while as some raged lunatic screams profanities at her. Has Hollywood really permeated the depths of my consciousness? Is my imagination really that predictable? These are some of the concerns I decided I couldn’t manage any longer. It was time to find out for myself.

Bootcamp – read in the March of the Penguins narrative voice of Morgan Freeman– is the exclusive fitness regime of Hollywood actors and actresses alike. Once a term used to describe a correctional facility for truant adolescents, it is now a class to endure in your quest for total body domination.

An insider to the physical fitness world at U of T told me I could find a bootcamp class at Hart House on Wednesdays from 5:30pm to 6:45pm. Was I free? But of course! How did I fair? Well I’ll tell you.

Katherine, our fearless leader, enthusiastic coach and overall fit guru had an intense class in store. A warm-up of laps around the lower gym, including arm rolls and stretches followed by an intense 14 rounds of three 1-minute circuits and then a lovely stretch cool down at the end. The meat and potatoes of this workout came in every shape and form; if you want total body domination this is it! First station of the first circuit? Take your pick – jump rope, shoulder press squats with dumbbells or step-ups (sound too easy? Try the triple stack – that one got the burn on). After the minutes passed at each station and a few rounds went by we were really sweating and I had completely lost track of how many rounds we’d done. A friend had joined me for the workout too and we’d both forgotten our water bottles: rookie mistake!

So, where am I hurting now? Well just about everywhere; my core certainly took a hit, clearly I’ve been neglecting it with all the reading I’m catching up on. Don’t get me started on the quads and gluts. Lets just say, I’ll be going back next week, rain or shine. Katherine, I have to hand it to you, I think your class would make  Tony Horton tremble!