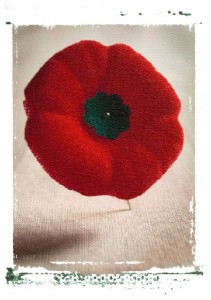 When I was in my late teens, I visited a friend in Belgium. Her father, knowing I was Canadian, took me on an impromptu full day driving tour of the war graves of Flanders. There was a language barrier between myself and this man and I was unaware of where we were going that day. We arrived at a walled medieval town early in the morning for breakfast. It was not until I was standing under a huge stone arch inscribed with the names of fallen soldiers, that I made the connection. I was on the battlefield of Ypres (pronounced ee-pers in Flemish) and I was reading the names of those killed at Ypres in WWI. Before this day, Ypres was just another name that I couldn’t pronounce, a place where the mustard gas attacks happened. Yet standing there under the arch, I was overcome with an eerie feeling that I had stepped into the pages of a history text. For the first time in my life, the great war became a reality to me.

Along with Ypres, we visited no less than 20 different Canadian war cemeteries. Some of them were large and some were small enough that you would miss them if you didn’t know they were there.

Remembrance Day has never been the same for me since that trip to Belgium. Every November 11th, I find my mind returning to that place  where, for me,  wars became real. I try to remember the rows of crosses, the poppies waving against the manicured lawns, the arch in Ypres, and hidden roadside monuments to Canadian regiments. I try to remember the fallen.

This year I went to the Remembrance Day ceremony at Soldier’s Tower, beside Hart House. I was happy to see how well attended the it was. This particular ceremony honours those students, faculty, alumni, and staff  of the University of Toronto that died in service to our country, some 1,100 fallen. The individual colleges presented wreaths from the student body and then from the faculty. Our very own blogger Chad presented one of the wreaths of behalf of Woodsworth College.  As a student, this ceremony touched me. Some of these fallen men and women were like just like us. They were students of U of T, maybe they even sat in the chair you are sitting in right now. Did you know that John McCrae, author of the poem “In Flander’s Fields”,  was a graduate of University College? I visited the monument to McCrae in Flanders, but until a few years ago, I was unaware that he had graduated from U of T.

I know there has been controversy over Remembrance Day celebrations. Some say that poppies and remembrance ceremonies glorify war. I have a different perspective.

I was trying to explain to the international student who is living with my family why we wear poppies in November. My response to her questions was that we remember the wars and the soldiers who died because if we remember then maybe it won’t happen again. This is probably an insufficient explanation, but it is what this day is about for me.

As we were leaving the ceremony, I momentarily lost sight of my son in the throng of observers funnelling through the archway of the tower. I turned around to find him shaking the hand of an elderly veteran. As I approached him, he was saying thank you to the gentleman. I don’t think my son will forget.

0 comments on “I remember…”