Shooting with the Archery Club 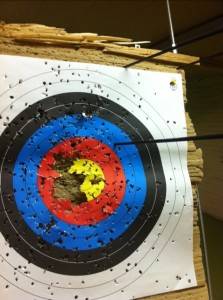 Happy post-Reading Week, dear readers! Please tell me that you also did everything but reading, because that’s what I did. Thoughts on last night’s Oscars? I was completely and utterly enamored with Anne Hathaway’s many style changes, but that’s about it.

Did you know that we have an Archery Club at U of T? Archery has always been one of those thing that I’ve admired from afar. There’s just something about the elegance of it and the intense concentration you need. Of course, being a gorgeous blonde elf doesn’t really hurt either, heh.

I met up with Alex, who is a coach at the club. She joined the club in first year, where, as an avid reader of fantasy and historical novels, archery was one of the things that she wanted to “try properly.”

I was surprised she became a coach so quick, and Alex tells me, “It’s one of the things we want to tell people. You don’t have to have prior training to join the club.” Apparently, Jin, another member, joined the club the same time as Alex and is now a contender for the 2016 Olympics. Wow.

As Alex set the equipment up, I took a look around the range. Due to photo regulations, I couldn’t take a photograph of the range itself, but it’s long, and there are targets set up at varying distances. I noticed that one of the targets had the remnants of toy stuffing and a beat up tic-tac-toe sheet. I asked Alex about it. “We have fun nights,” she says, “where we shoot at different things for points instead of the usual targets. For Valentine’s Day, we shot at heart plushies.”

Alex set up four different bows for me to see. There’s hers, which is a traditional long bow, and the three you see in the picture. Two recurve, and one complicated looking compound. 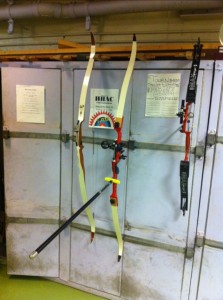 I wasn’t allowed to touch the compound, because I could seriously hurt myself if I don’t know what I’m doing. A little nervous, I asked Alex about injuries at the club. She laughs, “the worst we’ve ever needed was a bandage.” She stops and thinks for a moment, “and maybe some rubbing alcohol.”

That makes me feel much better. The club is overseen by a handful of coaches who keeps an eagle eye on the members and the range, and is very safe.

Mine’s my right, same as my dominant hand. I got ready and put on bracers on my left forearm and finger tabs on my right hand. I stepped up to the range and listened to Alex give me a primer. 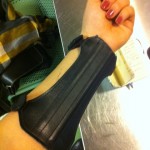 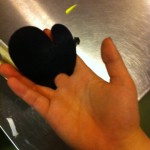 All right. Feet shoulder width apart. Stance relaxed. Arms straight as I draw the bow. Focus on the centre of the target. Breathe out and let the arrow fly.

…and watch it soar past the target, very very far away.

I gave an embarrassed laugh and was glad that we were alone. I’m not telling you how close the target was.

Ah. Much better! I hit the very corner of the board. At least I made contact with something. The next one was even closer, and the last one I hit the blue ring! There’s proof! Check the photo above! I know it’s statistically unsupported, but I’d like to think I’m a natural and made improvements by leaps and bounds. Nonetheless, I quickly helped Alex put the equipment away.

Shooting was a lot of fun. I’m actually considering joining. Signups happen every semester and there’s about 100 memberships sold in the fall semester and 50 sold during the winter, but there’s currently a waiting list. I think I’m going to go put my name down.

3 comments on “Shooting with the Archery Club”