Exams. Sleep. These two words really don’t go together in a sentence during exam time. I had four exams in three days last week, and the week before, a paper due in every class. I’m still working my three part-times, and well, to say I slept the recommended 8 hours a night is…

I know I whine about the lack of sleep a lot; in fact, I wrote about napping just a few weeks ago!

But I can’t help it. Sleep is the best friend you could always count on to lift your spirits, the one who you miss spending time with, and the one you haven’t seen regularly since high school.

During exam week, I sleep a major chunk (usually 4 hours) when I can, and I nap for half an hour every few hours. I talked to a friend and discovered that I’ve essentially moved from a monophasic (sleeping once a day) sleep schedule to a polyphasic (sleeping more than twice a day) schedule.

Interesting, I thought, so why not try incorporating it into my schedule, instead of feeling guilty every time I dive into the couch for a quick shut eye?

In the Canadian Marine Pilot’s trainer handbook, it says the following:

Under extreme circumstances where sleep cannot be achieved continuously, research on napping shows that 10- to 20-minute naps at regular intervals during the day can help relieve some of the sleep deprivation and thus maintain … performance for several days.

Basically, I slept 4 hours a night, then took a 20-minute nap every three hours (given that the average length of one exam is three hours and I really don’t want to be napping in between). I tried this for the majority of last week’s exam week from hell, and here’s what I’ve found:

Now, here’s the thing. I can’t compare how well polyphasic sleep worked compared to the regular monophasic sleep, because I can hardly redo all my exams with a well-rested version of myself to compare scores, but I know that adopting this sleep schedule got me through it while feeling less exhausted than I was during midterms. My body adapted to it, and soon, I was nodding off every three hours and automatically waking up at the end of the 20-minute mark.

I broke my schedule when I asked a friend to wake me instead of using my trusty ole iPhone.  She let me sleep 9 hours. That’s 5 hours that I didn’t have. Apparently, I looked completely exhausted that she felt bad waking me up. She meant well, I know. I actually woke up at the 8 hour mark, but I was so groggy that I couldn’t do anything other than sleep an extra hour to try and clear the grogginess.

At 8 + 1 hours, I woke with a sore throat that worsened over the next two days. I popped by a drop-in clinic and tested positive for strep. Yay: 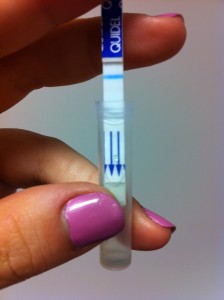 I still haven’t decided how exactly I got the bacteria, but I think it’s the culmination of bad food, irregular sleep schedule and general stress that made me susceptible to disease.

So I know you’re wondering – would I do the polyphasic schedule again if I could turn back time? In a heartbeat. Do I want to do this schedule again? No, not really. Better organization on my part can translate to lengthier, meatier sleep times. Will I use it again in dire circumstances? Yeah, I think so. What am I going to do when I’m done exams? You got it: sleep.

So how ’bout it, dear readers?  Have any of you actually tried polyphasic sleep? Tell me what your sleeping schedule is like right now and how you’re coping!