Life as a periodic lab rat

If you ask me, life as an undergraduate isn’t really complete until you’ve served as a lab rat for one of the many research experiments going on in a university. And where better to give back (not that we don’t give a lot already, in terms of moolah) to academia than at one of the world’s premier research universities? (What, you didn’t know? U of T is consistently rated among the top universities in the world for research. Yeah, we awe-some!)

First, what is a lab rat and what do they do? Well, the experimenters don’t actually call you lab rats, even if you may feel like one at times. But hey, life as a real lab rat ain’t bad. From what one of my profs told me, they are so well treated there’s even an ethics board for the humane treatment of lab rats!  (Or something like that.) Anyways. As a “participant,” you are helping out your experimenter with his or her research*. You may be asked to fill out questionnaires, or get hooked up to something, or do something on the computer. I know, vague, but really, you can be asked to do all kinds of things because the range of research at the university is so wide.

*Since you are vital to the progress of the experimenter’s research, it is really bad etiquette to sign up for an experiment and then not show**. Stay classy, ‘k?

**Sickness and extenuating circumstances excepted, of course. But do let them know ahead of time.

It’s really easy for psychology students to participate in these experiments because it’s worth 10% of the final grade for PSY100. Otherwise, pay attention to the posters around campus. There are calls for participants all the time. There isn’t really a central place to look for these opportunities online, but if you are interested, feel free to call any of the labs on campus. If they aren’t looking for participants, I’m sure they’ll know somebody who is.

I think, in total, I’ve served as a lab rat more than 10 times now. In terms of compensation, I got a credit for the experiments that I assisted on for PSY100. The other ones – which I participated in for fun – netted me Tim Hortons gift cards, U of T Bookstore gift cards, and even cold hard cash. I’ve received $10 for a half-hour experiment, and $50 for a two-hour one. I don’t think there’s an average rate, but you get paid according to the amount of time you spend and what you have to do.

Now, let’s talk about some of the experiments I helped with!

Yes, I’m lumping those into one category because the ones I did for that course were all questionnaires, and I don’t really remember too many details of them anymore. One of them was about politics, regarding my opinions of “underdogs” running in an election, and another was about study habits, I think. It’s all really hazy, but I do remember one of the experimenters asking me to identify the independent and dependent variables of the experiment before she would give me my little sheet of paper that certified my participation and my credit. I had only heard of independent and dependent variables* a week before that, and I was sweating that question so badly that she just took pity on me, told me the answer and let me go on my way.

* Just in case you didn’t know and wanted to, an experiment is said to be controlled, meaning that apart from the specific thing that the experimenter wants to study, everything else is kept constant. “Everything else” is made up of controlled variables. The independent variable is the sole (hence the name) variable that is changed, and the dependent variable is the outcome of that change (hence the name, because this variable depends on the change of the independent variable). So, for example, you want to conduct an experiment to see whether or not that new vitamin you just bought really gives you more energy during the day. You’d do the experiment twice, both times doing everything you normally would (sleep the same amount, eat the same things, etc.), once without the pill and once with it. Why without the pill? This is called the control group – your baseline. You’d record your energy levels in both cases and compare them. In this experiment, the vitamin is your independent variable, and your energy level is the dependent. Easy enough, right?

You know the HP TouchSmart? I got to play with the new model that was just released three days ago! And I got paid to do it! As I told the experimenter, I’d have gladly done this for no pay, but maybe not everybody is as excited by new gadgetry. The entire experiment involved my doing different tasks and reflecting on how easy the TouchSmart was to use, and whether there were any problems. I finished early, so I got to play with it for another 10 minutes. Glee! I want one now, unfortunately. I saw the poster for this experiment right beside the elevator at the Koffler Student Services Centre. For my participation, I got a $10 Tim Hortons gift card.

To be completely honest, this one was paaaiiiinful. I focused on a cross on the computer screen and reacted according to different lights that flashed onto the screen. I wasn’t allowed to blink during these 10-minute sessions (I did quite a number of them) because I was hooked up like a modern Medusa and my blinking would have interfered with the computer readings. 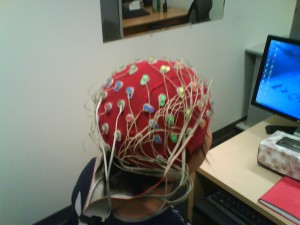 However, how cool is it that I got diodes stuck all over my head? Yes, that does mean I had lots of gel in my hair, but the experimenters thoughtfully provided me with a large sink in the bathroom, as well as a blow dryer, so it’s all good. This one gave me $20 cash, I think, and again, I heard about it from a poster.

Okay, this one was an MRI study and I fought pretty hard for it. I heard about it at the start of one of my psych classes, and I emailed the experimenter immediately after she put her address on the board. I am such a keener, but I wanted a picture of my brain, damnit! I was in the control group for an Alzheimer’s study, and before I headed over to the lab, I had to answer a long questionnaire to make sure I could safely go inside the MRI machine. These machines use huge magnets to scan your brain, see, and if you have any type of metal in your body, well, the result isn’t pretty. As an indication of how strong the magnet was, I walked past the MRI room and my dangly earrings actually lifted up in the direction of the room.

Another thing about an MRI machine is, if you’re claustrophobic, it’s scary. I didn’t think I was, but after I was strapped down, immobilized and put into the machine, and I felt this huge, solid enclosure surrounding me completely, I started to hyperventilate a little. It felt like a coffin, and my brain helpfully supplied me with an image of me trapped in a coffin hundreds of feet below the ground, with nothing but soil on top of me. I blame the Season 5 finale of CSI, to be honest, but as you can see, I had to calm myself down. I took in deep breaths, tried to meditate, and by the time I pulled myself together, I found that only five minutes had passed and the experimenter was still setting up. Wow, was time ever slow.

Fortunately, it was smooth sailing for the rest of the experiment, and this time I got $50. The experimenter also sent me pictures of my brain afterwards! 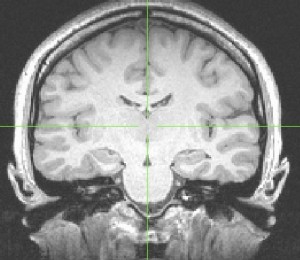 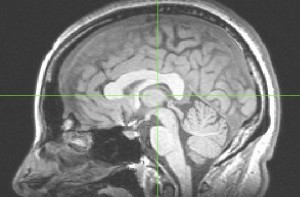 My nose is quite beautiful, I must say, though there is a small space in front of my brain, and since beauty is most important on the inside, I’m thinking cosmetic surgery for brain augmentation is in order. /joking

If you have time and want to make a quick buck, sign up as a participant to an experiment! Some of them are really quite fun and your participation is vital for the researchers at the university. If you’ve participated in an experiment, please comment and tell me what you did! I’d love to hear about it!