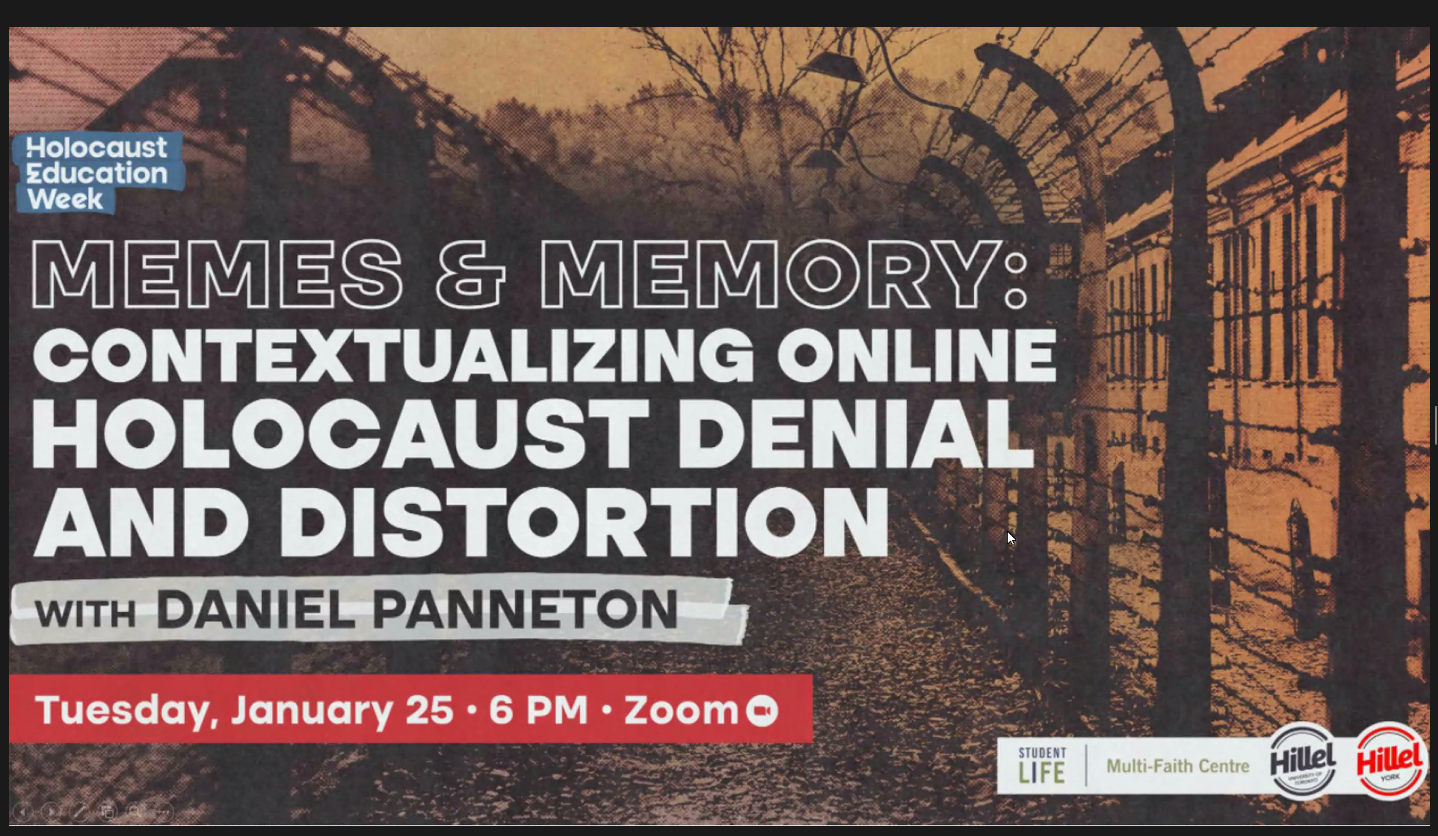 On Tuesday I had the opportunity to attend “Honoring Holocaust Education Week: Understanding Religious Discrimination,” a collaborative event held by the Multi-Faith Center at the University of Toronto and Hillel. The lecture, entitled “Memes and Memory: Contextualizing Online Holocaust Denial and Distortion,” was concerned with examining the way Holocaust memory has been altered and taken shape online, unpacking the radicalizing world views that have arisen out of this phenomenon while considering how Holocaust scholars and educators can re-shape the narrative in this post-survivor era.

The speaker, Daniel Panneton, is a historian who manages the Online Hate Research and Education Project at the Sarah & Chaim Neuberger Holocaust Education Centre and his writing has been published in the Globe & Mail and the Literary Review of Canada among others. Daniel focused his lecture on the role memes play in cultural radicalizing. He asserted, to provide context, that we are indeed living in conspiratorial times which is inherently linked to a rise in antisemitism and holocaust denial. It has been suggested, for example, that the Holocaust experience was exaggerated by Jewish people as a way to broker sympathy, revealing the hateful radicalization that results from the spread of misinformation.

Daniel emphasized that Holocaust denial has been occurring throughout history. Memes, which for the purpose of this lecture were defined as ‘images with text overlay used as communication devices,’ are called the ‘political pamphlet of the 21st century’ and are a popular means for facilitating the spread of misinformation. Repeated exposure to such hate material makes hate conditioning a real risk. These memes are reductive and a central trope is building upon existing pop culture to create new hate symbols, an example of which is Pepe the frog. Daniel also referenced the case of Bonhomme in Montreal, whose image was manipulated so that the figure’s white skin was seen as a symbol of white supremacy and a symbol of antisemitic discourses, showing again the manipulation of seemingly harmless imagery to facilitate a damaging discourse.

Counter-education continues to be a way of combatting the damaging narratives of antisemitism and Holocaust denial in meme culture, which trivialize the experiences of the Jewish community. This lecture highlighted for me the value of continuing to educate yourself on the ways in which one must exist and act in our modern context, especially on social media, to prevent ‘bad faith engagement’ as it is called and work to preserve the integrity of historical experiences. It has really encouraged me to consider the content I consume and the destructive power of social media. It reveals that we, as internet users, need to be actively aware of the prevalence of misinformation and damaging narratives which parade under the disguise of ‘humor’ and engage consciously and critically with narratives perpetuated online. Attending lectures such as these is a great way to keep yourself informed and aware, with the goal of preserving truth and honoring each individual and cultural experience with respect.