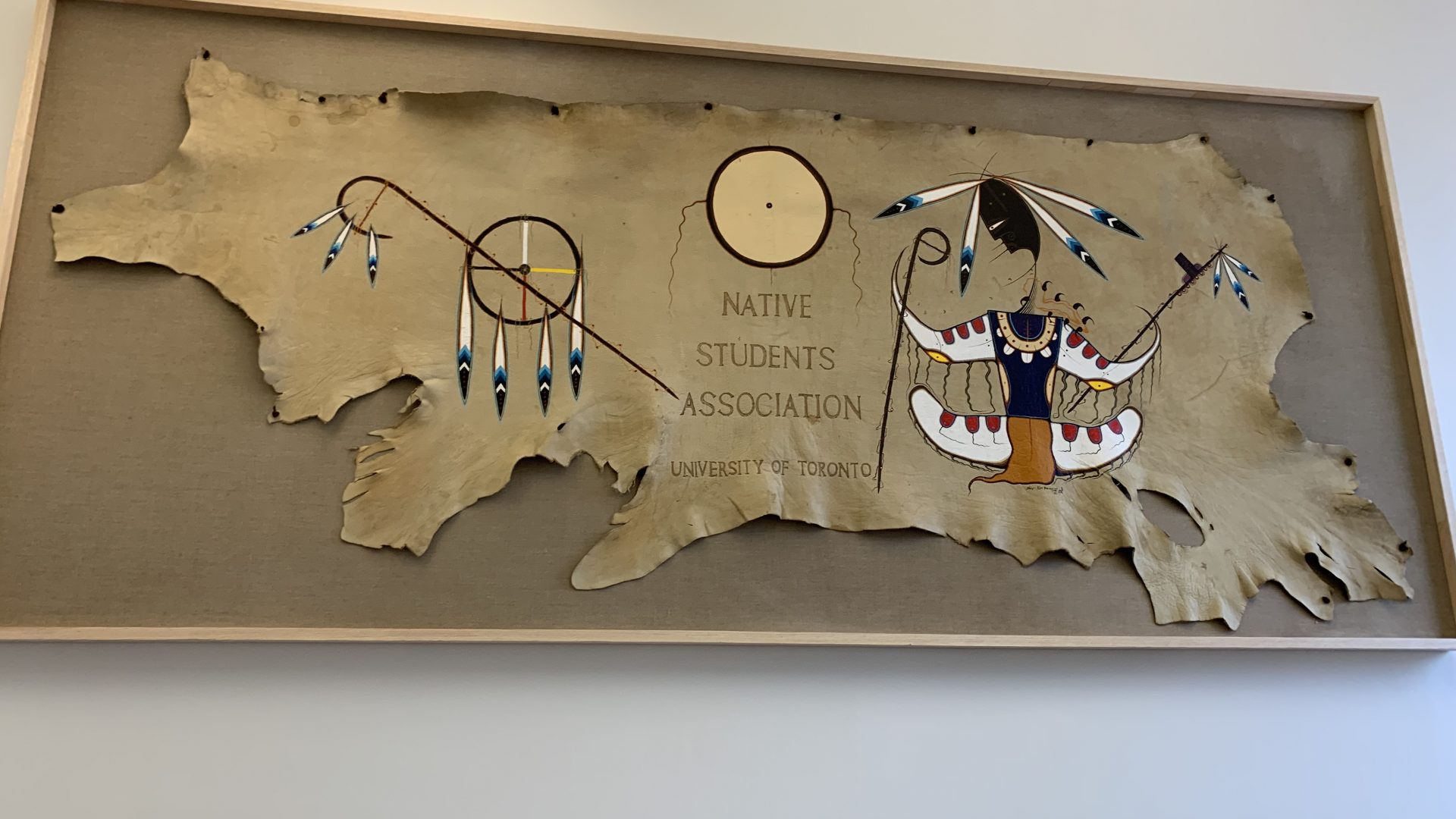 An Art Piece Revitalized to Commemorate Trailblazing U of T Students

Ey swayel. Hello. An old banner hangs in First Nations House, pictured above, that has been given new life. In 1992, the banner called “vision quest” was painted by M’Chigeeng artist Blair Debassige for the Native Students Association, as it was called in the 90s. The leather banner art piece depicts a vision quest while the staffs represent the idea of leadership.

In September of 2022, First Nations House will be turning 30. According to the director of First Nations House Indigenous Student Services, Michael White, the revitalization of the banner is a way to celebrate this birthday. It also serves to honour the people who commissioned the art piece and helped create the Native Students Association back in the 90s, including Alan Corbiere, Rob Innes, Carol Couchie, and Miranda Chitze. According to White, the banner is also a way of showcasing “Indigenous excellence,” as exemplified by the leadership demonstrated by the founders of the NSA who’ve gone on to fill prominent positions in the Indigenous academic world. Corbiere, Innes, Couchie, and Chitze have paved the way for a new generation of Indigenous scholars at the University of Toronto.

The Native Students Association has since been renamed the Indigenous Students Association (ISA). The ISA is recruiting new members to become involved with the association. For those interested in becoming a part of the ISA, please email FNH.INFO@utoronto.ca. Your name and contact information will be added to their listserv, and you will be notified of ISA-sponsored events, elections, etc.

There is also the Indigenous Studies Student Union (ISSU), which also seeks new members. The ISSU meets bi-weekly with the goal of fostering “horizontal, mutually beneficial, egalitarian, and respectful relationships within and beyond the membership in the spirit of the Indigenous values of friendship and community.” If you are a full-time student who has taken at least one course in Indigenous Studies, you are automatically a member of the union, however, if you’re interested in getting further involved and attending the bi-weekly meetings, please contact: indigenousstudiessu.uoft@gmail.com

I look forward to when the art piece is unveiled, which, if all goes as planned, will be when First Nations House reopens next February.