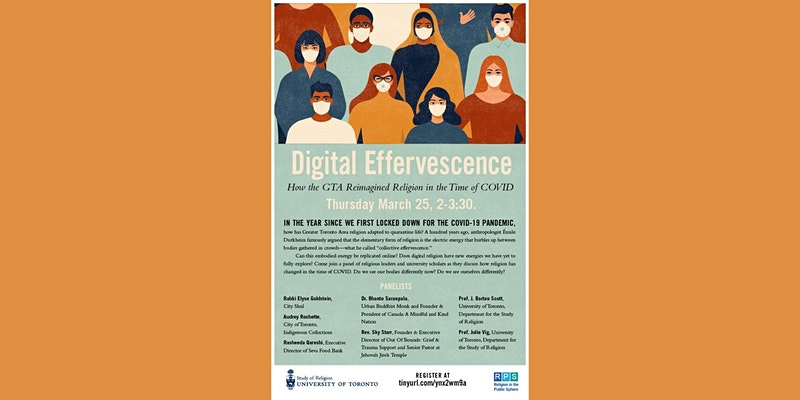 The pandemic has hit many communities hard over the past year. Essential workers and vulnerable populations have specifically felt the effects of the COVID-19 pandemic. While physical health and wellbeing is of primary importance, the mental and emotional toll the pandemic has caused to the general public is also worthy of attention. More specifically, spaces that were once familiar, second-homes for us, were abruptly taken away. For people in faith communities, this includes religious and spiritual services that were drastically altered after the pandemic began.

Navigating digital spaces has been challenging for leaders of faith communities, who have had to organize around the pandemic, while also encourgaing their community members along the way. That being said, the panelists who spoke at the “Digital Effervescence” event, organized by the Department for the Study of Religion, were hopeful and optimistic about the work they had done to make this socially-distanced world feel as “effervescent” as possible.

Before attending, I was unsure of what “effervescent” meant exactly, and how it would apply to the event. Almost immediately, it was explained that the word stems from a concept created by French sociologist, Émile Durkheim, who believed that collective effervescence happens when a community comes together in unison to express the same thoughts and actions. In a religious context, Durkheim argued that humans often get carried away performing dull and solitary daily work. Therefore, when humans come together for an event or an occasion, such as a religious service, these spaces, objects, and people become sacred due to the higher frequency of energy. So when these spaces are no longer in person, religious leaders had to ask themselves what digital effervescence could look like.

The advantages were that ceremonies are more accessible online. Several of the panelists noted that people from all over the world could now attend. Rabbi Elyse Goldstein also pointed out that this was also beneficial for their elderly attendees, who no longer had to risk travelling to and from the synagogue late at night or in hazardous, snowy weather. Rabbi Elyse mentioned that she emphasizes the significance in making your space at home like a sanctuary, so as to feel comfortable and connected during the services.

In terms of community-building, many of the leaders mentioned their work donating to food banks, considering marginalized communities and homeless populations have been hit the hardest. Rasheeda Qureshi of the Seva Food Bank said that they were forced to be more innovative and creative about their approach to community service. For example, they created a home delivery program because their agency partners did hot wheels. The two communities came together to offer an accessible option.

That being said, the faith leaders couldn’t deny the toll of the pandemic, and its impact on their communities. In many ways, video chat doesn’t offer the same experience. Audrey Rochette, who is Anishinaabe from Waabadowgang-Whitesand First Nation, brought up that Zoom and similar platforms are not always accessible to those without internet or the proper technology. Moreover, Zoom fatigue is a common phenomenon for many of us who spend all day behind our screens. Instead, Audrey suggested a phone call. It’s more accessible and allows people to step away from the screen, and maybe even go for a walk.

Reverend Sky Starr also mentioned that people need the personal connection and support that faith communities offer, and not meeting in person has been a struggle for many. It’s important to acknowledge the grief and that this is a particularly heavy time. Audrey Rochette agreed, stating that creating communities of care is crucial, which is why she begins every meeting by asking people how they are. It’s a small act, but when she asks the question she looks for honesty so that the group can open up and share their true thoughts and feelings. Often, we feel compelled to brush these questions aside, ignoring the potential they hold to help us release emotions, specifically during a time where there’s a lot of collective anxiety and depression.

On a lighter note, Reverend Starr thought the level of human compassion and love for one another needs more attention. Since the beginning of the pandemic, people have been caring for one another in ways that was lost on us before. We’re more aware of each other now and how other people are feeling.

The speakers are still learning how to operate in a digital world. But they are hopeful for gatherings offline too, promising to hug each other one day when an event like this can take place beyond a screen.

0 comments on “Creating Digital Effervescence (in a less effervescent world)”