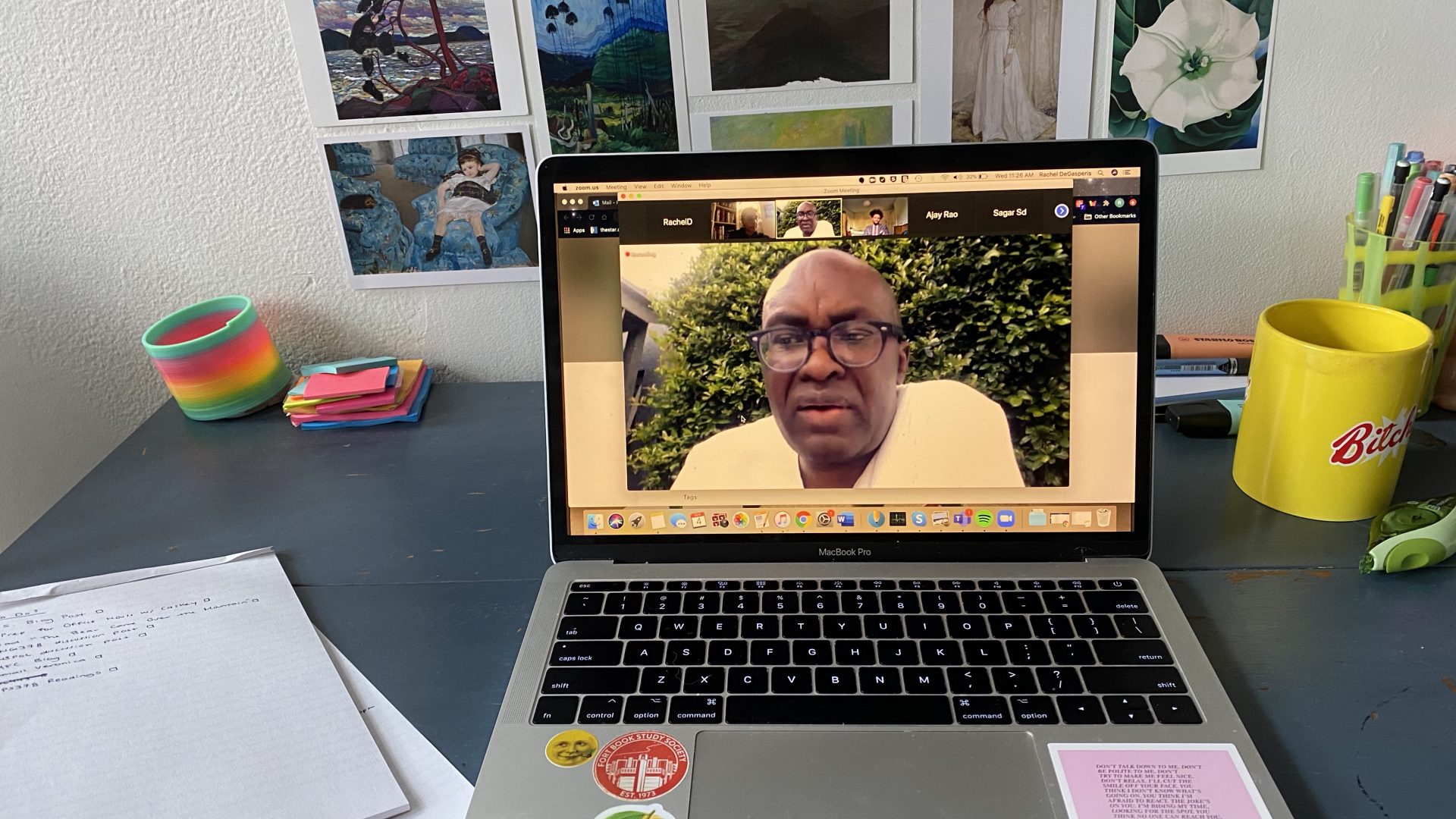 Exploring Online Events: Discussions on Race in a COVID World

Recently, I’ve found it more difficult to get excited about attending events in the age of a Zoom-only world. However, I’ve forced myself to come to terms with two things: 1) COVID-19 may not be going anywhere anytime soon, and 2) online events are more accessible, and allow me to attend discussions without actually having to be physically present. Not only is there no commute, but most of these events are free with unlimited numbers for attendance. Although this could hardly be called a silver lining, I do now have access to hearing perspectives from renowned theorists from around the world. I cannot deny that I would not have had this opportunity otherwise. Even when I don’t want to spend another second on Zoom, I’m encouraging myself to reach out and attend any event that sounds interesting. I’m at home anyway, so I might as well make the most of it.

This week I attended two events on race-related subjects. The first being an event with Harvard University on “the Religion of White Rage”. Two days later, I had the opportunity to see (via Zoom, of course) Achille Mbembe speak at the University of Toronto Mississauga on “Race and Caste”. As a political science student, Mbembe is a theorist I’ve encountered many times throughout my education. Seeing him speak in real-time, even if only through a screen, was incredible. Despite the havoc COVID has created, I must admit that I would never have been able to attend a Harvard event last year, nor would it have been an easy task for UTM to get Mbembe to fly in for a panel discussion.

The first event I attended this week, “The Religion of White Rage,” was especially pertinent in the context of the current American election. The talk centred around an analysis of America as a country founded on ideals and rituals that seek to uphold White supremacy. The speaker, Lori Latrice Martin, cited the example of Colin Kaepernick, who received public condemnation across America for kneeling during the national anthem in protest of police brutality. The backlash in response was largely because many felt that Kaepernick’s kneeling was disrespectful to America, a nation that is often idolized by its own citizens. However, Lori Latrice pointed out that, more fundamentally, Kaepernick rejected America as a state that historically and actively oppresses its Black citizens. This inherently threatens America’s foundation, which has constructed its systems and its own identity around the subordination of Black people.

For the “religion of White rage,” White is something that needs protection from the ‘Other,’ whose mere existence both upholds and threatens the superiority of Whiteness. In Trump’s America, this takes the form of people rallying against immigrants, who are perceived to be a group of people that threaten the jobs and economic opportunities of the working class. The “hard working American” has become a figure that is safeguarded and mythologized. One of the key components of this myth is the idea that the hard working American built America themselves. This excludes the grim reality that slavery, both through the slave trade and through the current prison system, has built and continues to build America.

However, it is important to remember that Canada is imperfect as well. Mbembe’s talk centred on race and caste, and how the two intersect and overlap. However, I was more interested in Mbembe’s theory of necropolitics, which he discussed briefly, and which I have learned about separately in my personal courses. Necropolitics argues that the state marks certain populations for death. For example, a form of necropolitics is when certain communities are denied the resources that are extended to wealthier, specifically White, populations. This is apparent in Toronto, where Black communities experience higher levels of COVID-19. Furthermore, in the midst of a pandemic, many Indigenous communities across Canada still do not have clean drinking water. There are reasons why some groups experience the negative effects of COVID-19 more than others. If even basic human necessities are not being met, then most Indigenous communities likely do not have the resources to fight COVID-19.

Attending online events always seems like a chore when I first sign up. In the aftermath, I almost always feel like I saw new perspectives and learned interesting pieces of information. The reality of a Zoom world means that I can make coffee or fold laundry while listening to the discussion. If they aren’t interactive, and my camera can be turned off, I can treat these events like a podcast. Adjusting to COVID-19 is not easy. However, in some ways, these flexible modes of living can allow for more creativity in our daily lives. The little things can be appreciated.

0 comments on “Exploring Online Events: Discussions on Race in a COVID World”