Today marks the end of the #JoyAtUofT campaign. I decided to dedicate this post to one of my favourite places to work-out – HART HOUSE!

Currently, I hit Hart House’s Fitness Centre at least 3 or 4 times a week, but rewind back to first year you would never see me at the gym. It was only until second year that I thought I would try out the fitness centres on campus.

That first step can be intimidating. You have these ideas in your head that everyone at the gym is super buff and you’ll just be walking around having absolutely no idea what you’re doing. I reasoned I was my own barrier to not being active, and decided to give both Athletics Centre and Hart House a try. Between those two gyms, I like Hart House better. Hart House is known for its more inviting atmosphere which may appeal to those who are beginners. I’m a rather low maintenance gym-goer. I really just need a place to run. I love running on the track in Hart House. I like how the track is on the upper level which means you can check out what’s going on in the Lower Gym. Sometimes, you’ll catch an intense game of dodgeball or see some impressive skills in a game of volleyball. I also enjoy the fact there is space on the outer perimeter of the track for stretching purposes. In addition, with exercise bicycles nearby, it’s easy to do a cool down after a good run. In comparison to Athletics Centre, the track at the Field House is quite large, much larger than Hart House’s. It’s a bit discouraging when it seems to takes forever to just do one lap around the track. Hart House is also equipped with a weight room, cardio room and swimming pool. They also offer a variety of free drop-in classes which are also a lot of fun to try out! I highly recommend Zumba with Rachel!

I enjoy my time working out at Hart House so much that it has become something I look forward to in my school day, and that’s why it’s one of my joys at UofT! 🙂 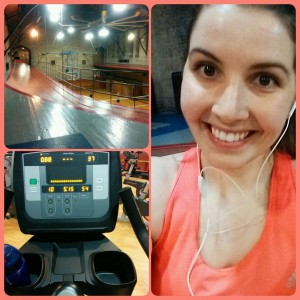