The secret and fabulous life of… askastudent

At exactly 10:59 on Thursday May 14th, I stepped into Innis College‘s registrar. If I didn’t know better, I would have thought I’d stepped into a clinic – the small office was lined with rows of colour-coded folders behind the receptionist and had plastic waiting chairs in front. Less than a minute later, I was greeted by the associate registrar, Thomas Mackay. An unassuming and articulate man, Thomas had, as I mentioned on Twitter, promised me an exclusive interview to reveal the elusive identity of askastudent.

Described on the site as a “honest, hilarious, ridiculously good-looking and infinitely benevolent being”, askastudent takes questions submitted through their site and answers them in a hilarious, but ultimately helpful way. As Thomas beckoned the being forth, I saw that I was deceived. askastudent actually consists of multiple identities rather than the singular implied from their name. As not one, but two askastudents greeted me, I realized why they looked so familiar – they both work at the Registrar’s office! So pop by, even if you don’t know who they are, you can still bask in the askastudent’s (er, askastudents’ – note the newly corrected syntax) omniscient presence and soak up their vast vat of knowledge.

However, apart from the semantic dissonance I get every time I look at the name, the rest of the askastudent biography is pretty accurate. I can personally vouch for the ridiculously good-looking bit. The two askastudents brought me to the Innis Cafe, where we were later joined by Thomas. Surrounded by mimosa-coloured walls and comfortable in plush, burnt orange armchairs, the four of us chatted about the secret inner-workings of askastudent.

Contrary to what you may think, askastudent answers every question that comes in. And judging from their recent rant, they’ll be answering for quite a bit. Did you know that when you ask a question, the askastudents are willing to go to the ends of the earth for you? Apart from going behind the scenes to the higher ups in the university, they tell me that they’ve called residences sounding “young and misguided”, all to procure whether or not there’s a fridge in the basement of your residence. They’ve even braved Vic’s automated answering system. Kudos to work ethics!

“It’s like being a double agent”, the recent architecture grad, codename aska1, grins at me, “we’re under the radar, but we have one foot in the institution so that we can get your answers and give you an opinion on it.” aska2, a linguistics and NMC soon-to-be grad, adds, “That’s the difference between us and the registrar. Our answers are opinionated. You’re getting what we think, and there is no bias in mocking.”

From answering questions about entrance marks to which is the best college, aska has seen it all. Once, they even discovered that the scientific term for stomach growling is the onomatopoeia “borborygmi”!

But it’s not always hard work. They do get the occasional “exotic” questions, which is, as aska1 says, a great opportunity for funny-linking.

“There was this one submission,” said aska2, “where this Russian lady was looking for love. We laughed hysterically when we got it, and mocked it – our readers really defended that lady – just look at the comments.”

aska1 adds, “But we love and post all the comments. Sometimes, they’re really helpful. We get questions about specific courses and we have no clue. We try our best, but then, a student from that course will leave a very detailed comment, and it’s great.”

aska2 suddenly laughs. “I just remembered this other one, a girl broke up with her boyfriend or something, and had written this poem for him, and it rhymed and everything!” he says. “There’re lots more of these gems under the weirdness category.”

But there’s more than just a weirdness category. Since their facelift from the late 90s, askastudent has gone from a simple question-and-answer page to their current interface – a slick black blog with a categorized archive that houses every question ever asked and answered. Yup, I said since the late 90s. askastudent has been around for a while. Back then, the original aska was a student who worked at the registrar’s office and was frustrated that she couldn’t give her uncensored opinions to student questions. So together with the Innis Registrar, they created askastudent, and it made its mark in cyberspace as a “balance of candid voice with a personality.” Thomas says that that voice has stayed surprisingly consistent over the years. The questions, too, haven’t changed much.

One of the most frequent questions they get is about bird courses. “Honestly, it’s hard to answer that one because if I find writing essays easy, then a writing intensive course will be easy for me.” I had to roll my eyes at the diplomatic answer and pressed them further, and aska2 admitted, “Well, there are some courses, that if you look at their name, you can tell it’s not going to be a killer, you know, the ones that sound like the name of a Sesame Street episode.” The anti-calendar, they said, is also a great resource. “Check the back for the profs who refused to release their rating,” aska1 leaned forward and whispered conspiratorially. “That’s usually an indicator.”

The askastudents take no prisoners. As they said, there is no bias in mocking. No wonder their identity is kept secret. However, being paid to be snarky? What a fab job. So just where do you sign up? “It’s a work-study position”, says Thomas Mackay. “We’re equal opportunity, but you have to be over 2nd year at least, to have the familiarity with the university we need, even if a first year student can sympathize really well with some of the questions”.

Secrets revealed and my mission a success, we concluded our interview and I was led back to the aska lair. For the first time in recorded history, I was granted permission for a photo.

Here it is, dear readers, the big reveal. Popcorn, front row, and drumrolls please. Ladies and Gentlemen, may I present, askastudent! 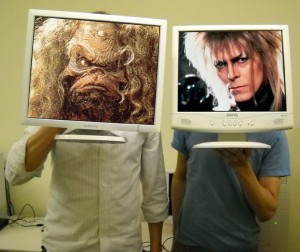 6 comments on “The secret and fabulous life of… askastudent”