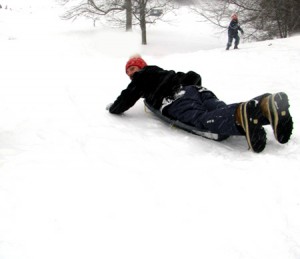 Being a student taking primarily history classes, I had forgotten all about rise over run equations until just recently, when in a biology lab I had to graph and calculate the extinction coefficient of chlorophyll. I’m still not really sure what an extinction coefficient of chlorophyll is, but luckily I’ve been able to put my lab skills to practice somewhere else: with all this snow, I’ve exported my [diminutive] mathematics outside the classroom and have applied them to some of the city’s more invigorating and intoxicating topological features: tobogganing hills.

“In Toronto?” you might guffaw. It’s flat here, yes; but there are still a number of relatively steep (and central) hills down which you can slide (or, if you’re anything like my little twenty-year old brother, roll). Just because the term has started up doesn’t mean we should stop enjoying the great outdoors.

The hills here are a bit busy, but still fun. You have to go up to the Howard Park Ave. and Parkside Drive corner of the park in order to hit the slopes, where there are open hills that are free of trees. As High Park is so close to Roncesvalles, it’s nice to afterwards sit in one of the neighbourhood’s small cafes drinking hot chocolate and eating Polish pastries.

The hill is surprisingly steep! I admit it: I felt pretty cautious the first time I peered down the hill’s slick side, from up on top. There are lots of built-in bumps, too, for those hearty sledders who like to fly. From here you can also easily make your way into Little Korea, and get some piping dinner (yay kimchi!) for a couple of bucks. Slope: yikes/yay!

Here there is a ring of hills that all lead down into the one large, deep ravine. You do, however, have to watch for people walking their dogs, and might occasionally get chased by a good-willed pup who wants to join in the fun. Bordering on Queen St West, after sledding you can get a hot drink and real French croissant, made on the spot, at Clafouti.

There are lots of busy roads surrounding the ravine, but as these hills border on the Don Valley Park System, they aren’t too hard to access. You do, however, need to find an area free of trees.

Big sweeping hills! Close to the Danforth, too, where you can get an assortment of treats afterwards. Slope: gradual/long.

Toronto has a number of outdoor skating rinks too, which are a little less abrasive on the rear end (provided you can stay standing on those two thin blades). My all-time favourite is the Natrel Rink on the Harbourfront, where it’s possible to rent skates and glide around the ice right next to Lake Ontario, removed from the noisiness of Toronto traffic.

1 comment on “Rise Over Run: Testing Slopes in Real Time”