This past Sunday I was fortunate enough to have the opportunity to attend the “Places of Worship Bus Tour”. The purpose of this event was to give every attendee a greater understanding of different faiths. The event also focused heavily on interfaith dialogue and how interaction between communities of different faiths dissolves the problematic and exclusive “Us versus Them” perspective. We also learned how religion intersects with social justice because there is a “communitarian ethos” built into its framework. This value system promotes community involvement and counters individualism, which often promotes the “every person for themselves” narrative. Therefore, it is not surprising to find that religious groups tend to be heavily involved in social justice, and that they are often the first groups to respond to humanitarian crises.

We began the tour at Holy Blossom Temple, a Reform synagogue that is Toronto’s oldest Jewish congregation. Holy Blossom believes in valuing both tradition and modernity, seeking growth and connection with their faith. We were told that in Orthodox synagogues, men and women would have separate seating during the ceremonies and that women were never allowed to be Rabbis. However, as a Reform synagogue, Holy Blossom actually has a woman, Rabbi Yael Splansky, as their Senior Rabbi. Holy Blossom focuses heavily on social justice values such as gender and racial equality, as well as supporting migrant farm workers and refugees. In addition, Holy Blossom participates in the Out of the Cold program, providing shelter and food to people that are homeless or in need. They have been told that their community is one of the safest shelters in the city for people that are homeless.

Next, we visited the Shromani Sikh Society Gurudwara. While here, I had the opportunity to learn more about Sikh practices. For example, Sikhs consider their faith to be non-secular, recognizing their religion as a sovereign entity with a connection to politics. We also learned about the Sikh persecution in India, specifically in 1984, and how it tends to be misunderstood as random rioting rather than state-sponsored and highly organized massacre. This type of violence against Sikhs is disturbing, especially in contrast to their beliefs, which encourage inclusion and peace among all people. The Sikh tradition strongly believes in basic human rights for everyone and, to demonstrate this, their kitchen is open to all and serves vegetarian food so that all meals are accessible. The virtue of service is a key component in Sikh values, so feeding people and providing the public with nutritious foods is an act they practice often. They even did so with our tour group, serving a group of about 30 people a full meal. 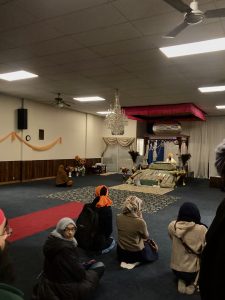 Lastly, we visited the Noor Cultural Centre, a mosque and community group in Toronto that is dedicated to respect, humility, and appreciation of diversity. Noor is especially dedicated to gender equality in the mosque. While women everywhere are subject to various forms of oppression, gendered violence as being something especially common in a mosque is a misconception normally predicated on stereotypes and prejudices regarding the Islamic faith. Of course women everywhere are subject to various forms of oppression and gendered violence, and the Muslim community is no exception. However, spreading the false belief that sexism is intrinsic to Islam is untrue and merely a way of perpetuating Islamophobic rhetoric. In fact, the Noor Cultural Centre has made gender equality and social justice one of their main values. It was explained to our group that the dissolution of social hierarchies is critical to the Islamic faith. This idea stems from the belief that God is superior to all and, therefore, to call any human being superior to another based on race, gender, class, etc. is putting a person on a pedestal that is reserved only for God.

Our tour guide for the trip, Brian, recalled that, following the Pittsburgh synagogue shooting that took 11 lives in October of 2018, the synagogue was packed with people from many different faiths to support the Jewish community. Although tragic, it was heartwarming to hear that Muslim community groups organized rings of peace around synagogues throughout Toronto following the attack in support of the faith and their safety. Following the Quebec mosque shooting in 2017, Jewish and Christian groups did the same for the Muslim community as well. We often only hear about the divisiveness of religion, but there’s so much evidence that proves otherwise. The “Places of Worship Bus Tour” only strengthened my faith in religious groups as being something that truly does value human rights and social justice, especially human kindness and compassion.

0 comments on “Experiencing the Places of Worship Bus Tour”