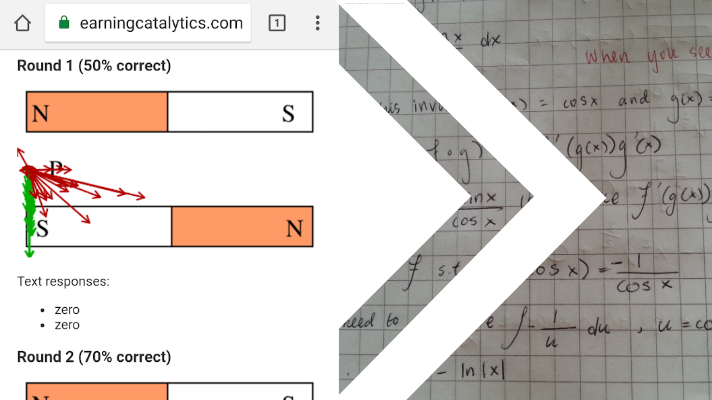 Being Instructed to USE Mobile Devices in Class

Goodbye clickers, hello smartphones! “Talk to *insert student name here* behind you and discuss the question again”. This message that displayed on our mobile device screens was freaky at first…

In my calculus course last winter, if caught using your phone during lecture, my professor would call on you to answer questions or to explain what he was teaching in the past five minutes. It was great in my opinion – limiting technology to make sure we were paying undivided attention to what’s being taught (my best grade was in that course).

I’m pro old-fashioned, longhand note taking but I also admire the digitized notes that my friends who use tablets and laptops in class create that are neat and complete with pictures. This summer semester, I realized just how useful digitizing a classroom can be through PHY132: Introduction to Physics II.

This message that displayed on our mobile device screens was freaky at first. Dr. Carolyn Sealfon used an online question site called Learning Catalytics that replaced the conventional i-clicker questions that I used in previous classes. During class, she would post questions and we’d sign in on our mobile devices, enter our seat number and answer them. Once time was up, the correct answer would be displayed on our phones and we could see everyone else’s answers anonymously as well.

She would often group up using our answers if there wasn’t a consensus among us. If that wasn’t cool enough already, we also had access to the questions so that we could review them after class! This was a great addition to the online problem sets we completed weekly through Mastering Physics.

Being in class: In person or on a screen:

Halfway through the course, my professor was away for a week. Expecting a TA to step-in while she was gone, we were surprised to see her in class, on Skype! I’ve personally thought of Skyping into a class if I was sick but haven’t had the chance to try that yet (touch wood!). This occurrence reminded me just how helpful technology can be in the classroom when used right. Having problem sets due online also made it convenient compared to other classes I’ve had in which I’ve had to be on campus to physically drop off my work on the due date.

A SMART Board is an interactive whiteboard that acts as a giant tablet. My first encounter with one was in high school. A substitute teacher thought it was a normal whiteboard and wrote on it with a marker (half the class was spent trying to erase it). During PHY132’s office hours, we would congregate in the newly renovated Physics Undergraduate Wing and write our questions on the smart board. We didn’t have to worry about space because the professor could just scroll through the board later on to see them. This saved time – both writing, going through questions and erasing them.

What do you think about technology in the classroom? Let us know in the comments below!

0 comments on “Being Instructed to USE Mobile Devices in Class”