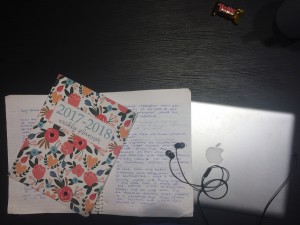 I don’t know about you but I’ve always been confused about how to go about note taking in class. I’ve seen several of my classmates and friends do it and I’ve seen several of them just listen, or at least act as if they are listening, haha. Over the last months, I’ve tried every method in all my classes and so far audio recordings work best.

I think the most important thing to know (and I wish I knew this first and second year) is that audio recordings are a true blessing. In some classes professors video record lectures themselves and upload them but most don’t. I would suggest raising your hand and asking the professor if it’s okay to record the entire lecture. You could ask the professor after class but the reason I would recommend asking the professor in front of the entire class is that they should know that their questions and discussions will be recorded as well and also I’m sure many of them have the exact same question! Most professors are okay with this. The only thing some caution you about is not to circulate the material to people outside the course and as long as you stick by that, recording the lecture should be no problem at all! Let me tell you why this works:

That being said, it’s important to remember that some classes (especially smaller ones) might not be okay with lecture recordings, so make sure you ask your professor before you take the recording. Moreover, some classes (like Math) need you to take detailed notes, and recordings in that case might not make much sense. It’s important to keep in mind that recording the lecture is not an excuse for you to slack off in class. This is one of the biggest mistakes students make. Like I mentioned, zoning out for a few minutes is natural but if you extend that, you’re missing out on important audio visual information that is helping your mind encode the information. Plus, the point of the recording is so you don’t have to worry too much about missing out in information in your notes and so you can focus on present classroom discussion instead. So before you take the recording, remember that while it is a great study tool and resource that many of us are privileged to be able to use, it cannot be the only thing you depend on. Audio recordings are meant to complement your study process along with your classroom discussion, notes and group study sessions!