An Afternoon at Walter Hall

Every now and again, during my midday campus dashes, I’ll cut through Philosopher’s Walk behind Trinity College which opens up on Bloor Street at the north end.

And every so often, as I’m huffing and puffing my way across the winding paths, I’ll hear distant echoes of what sounds like a piano playing or snippets of lilting tunes coming from somewhere far away.

The source of the sounds was a short-lived mystery- tucked away amidst the leafy trees in Philosopher’s Walk are the University of Toronto’s esteemed Faculty of Music facilities, which I spent last Thursday afternoon getting acquainted with.

No, scratch that. Let me say-

I spent last Thursday at the opera. (how sophisticated does that sound??)

Seriously, though. Last week, thanks to a surprising bout of productivity, I found myself browsing the U of T events calendar to look for an interesting way to spend some free time and came across the Thursdays at Noon program held by the Faculty of Music. 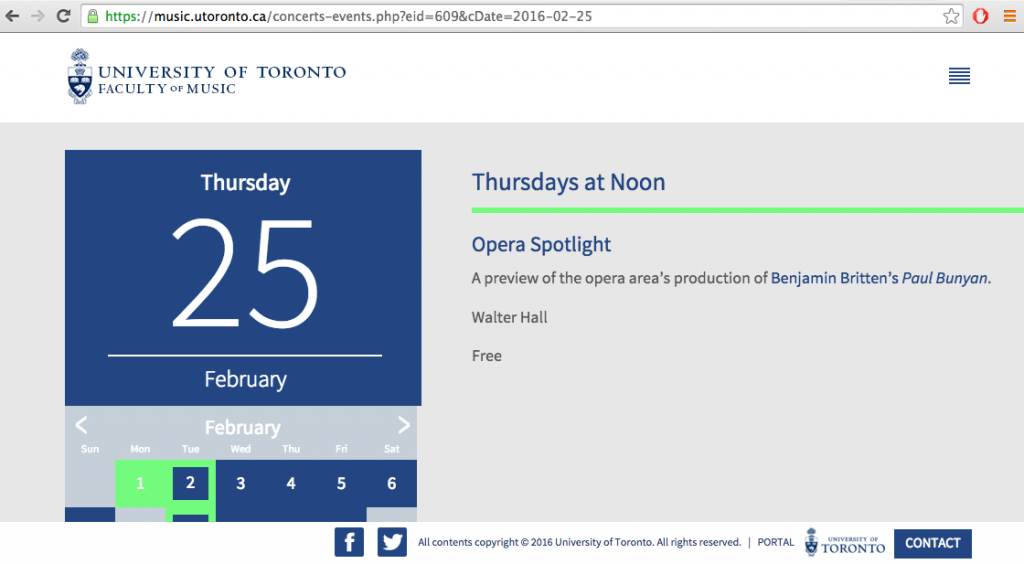 Every Thursday at 12 PM, students and staff from the Faculty of Music put on a performance for the audience to enjoy and last week- the show was ‘An Opera Spotlight: A preview of the opera area’s production of Benjamin Britten’s Paul Bunyan.’ 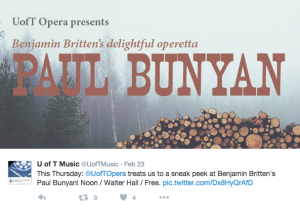 Mind you, I didn’t have the slightest clue who Benjamin Britten was, nor what to expect from an opera performance (please excuse my ignorance, music majors!) but I thought it might be an enriching way to spend a rather grey Thursday afternoon.

The performance was being held in Walter Hall, in the Edward Johnson building shown in the photograph. 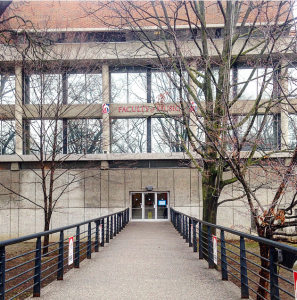 I made my way down there at a quarter to, spending a little time navigating and exploring a building I’d never been inside before. Edward Johnson Building is a cosy one, with warm red bricks featured heavily in the interiors and the sounds of peoples’ laughter echoing in the hallways. Everybody seems to know everybody else with an easy familiarity and it makes for a lovely, welcoming environment to be in. 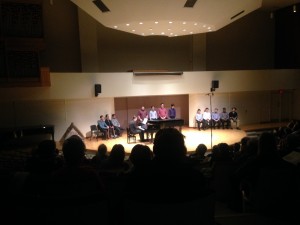 Walter Hall was quite packed when I took my seat at approximately 12:04, with people trickling in until ten minutes past the hour, when the show began.

We were told a little bit of history about ‘Paul Bunyan’, an eclectic piece by Benjamin Britten and the famed English poet, W.H Auden. It is based on the story of- you guessed it- Paul Bunyan, a mythical giant lumberjack from North American folklore, who curiously enough, is never seen in the performance- only heard.

There are several other characters who take centre stage in the show, including Tiny, Paul’s daughter, several cooks, farmers, lumberjacks and a medley of animals, each with their own little quirks and oddities.

The performance was both amusing with its comedic lyrics and awe-inspiring; I was taken aback by the cast’s vocal abilities. I’d never heard a piece quite like that before. Music and song in the part of the world that I come from take on a very different form, so this was my first experience with a piece of this kind and I enjoyed it immensely. There was something so whimsical about sitting in a warm, cosy music hall, listening to the ‘cooks’ passionately sing about soup and beans (you heard me) right after a very serious political science lecture on realism and conflict.

I also enjoyed the fact that in between the musical pieces, we were given a bit of background and trivia about them and the authors. 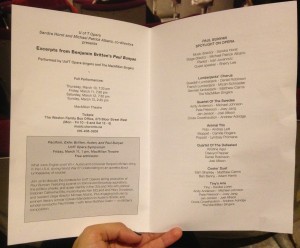 Overall, I had a lovely afternoon at Walter Hall and left the Faculty of Music with a buzzing and refreshed mind. (also, with the words souuuuuuup and beeeeaaaans whirling around my head, thanks cooks!)

The complete performance of Paul Bunyan is going to be held on March 11th at the MacMillan Theatre for anyone who’s interested!

If you’d like to know more about the Faculty of Music and the events they host, you can go on over to their website or drop by on a Thursday afternoon to experience the magic for yourself. #treatyourears

0 comments on “An Afternoon at Walter Hall”