This past week, Amie flawlessly captured the essence of Club’s Fair in her latest post. There were smiling faces, people learning about new clubs that interested them, and loads of students all looking to get involved in their university campus. 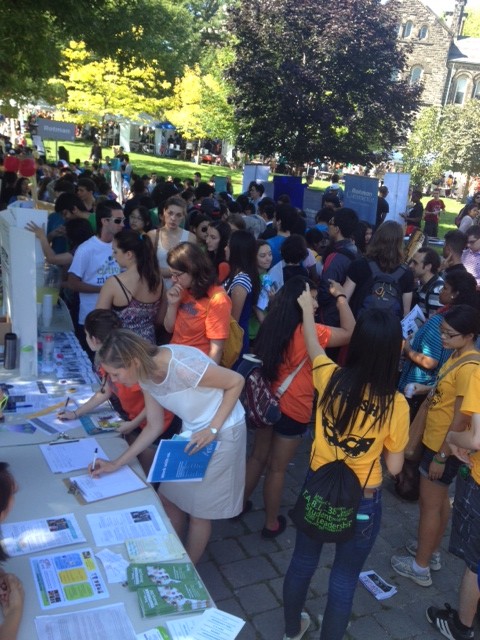 This year, for the first time ever, I got to experience club’s fair a little differently: I was on the other side of the table.

Being part of the executive team on a campus organization has so far been both a lot of work and a lot of fun. I got to experience the UTSU Club’s fair from a different perspective, and I found that it’s a seriously community building event for a few different reasons!

I got to build a network. Club’s fair was the ideal place to network with other students! No emails, no phone calls, just simple in-person contact that connected me with other leaders on a more personal level. I met people who had similar interests and who wanted to collaborate on future endeavours! There’s nothing quite like the feeling of slyly slipping people business cards with a “Hey, keep in contact, here’s our info.”

I made a few new friends. Engaging with students that stopped by our table involved just asking them questions about what they were studying and why they were interested. A lot of them took the opportunity to ask about our own programs of study and how we liked our life at U of T.

I got to talk… a lot. Is it conceited to say that I love to hear myself talk? (Just kidding!) It might seem hard to believe but I’m actually a fairly shy person, and I used to be uncomfortable with public speaking. After a lot of practice (and even a workshop from U of T Public Speaking Club) I’ve gotten a little bit more comfortable, but I never give up the opportunity to practice talking! The Club’s fair had my voice hoarse before the end of the day.

Overall, the Club’s fair was very uniting! I got to watch a dance team perform, see the kendo club practicing, and explore tons of different areas that U of T is dedicated to. Despite the hoards of students situated in Hart House circle, I really felt a sense of community!

What club are you most excited for, U of T? Let me know down in the comments!