When The Bells Toll

I knocked the door at the top of the staircase tentatively. The 75+ steps leading up to the Soldiers’ Tower Carillon left me breathless, and after travelling up those narrow steps (stay away if you are acrophobic and claustrophobic), I wasn’t sure what to expect.

“Come in!” A deep booming voice reverberated through the door. For a moment, I imagined that I was about to step into something out of The Hunchback of Notre Dame. I imagined seeing the giant bells looming above my head, and having to step haphazardly between cables and wires that keep the clock running. Oh, and a dark, sombre organ-like instrument taking up a wall.  No Quasimodo, of course. I’m a pretty realistic person.  So I braced myself, put on my best smile (all the while trying to catch my breath) and walked in…


… To be greeted by Michael Hart, U of T alum and carillonuer a.k.a. one of the nicest people on campus.

Thanks to Kathy Parks of the Soldiers Tower committee of the U of T Alumni Association, I got to see the inside of the Soldiers’ Tower. The carillon is the set of the bells we hear every year on Remembrance Day and all throughout Convocation. The first landing was the practice room (because there is a practice carillon and the actual carillon). There were no ominous shadows, no thick cables. Instead, the practice room was cozy, with pictures of past carilloneurs on the wall and a lamp in the corner. On one side is the back of the tower clock. It is completely mechanically run, no electricity. Few clocks, especially of that size, run mechanically anymore. 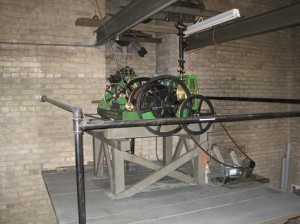 After that, he took me up (another 20 or so steps) to the grand carillon, and had me play a few notes. The wires from the keys extended up into the low ceiling. Being a piano player myself, it was both fascinating and weird to not hear the sound coming from in front of me, and to see a keyboard being played with fists. It was as if all those years of my piano teacher (a.k.a mom) telling me to not pound the keys are completely thrown out the tower windows.

Speaking of bells, the final part of the tour consisted of actually seeing the bells. After about another 10-15 steps up the stairs, I walked into a room that had some of the biggest bells I’ve ever seen. The bells were hanging off this metal rack, and seemed to reach the ceiling. I swear, the clappers for some of the biggest ones are as big as my head. The thick wires that connected them to the keys in the floor below – the way it was set up reminded me of strings in a grand piano. Fun facts: There are 51 bells, all tuned chromatically. The smallest bell is 23 lbs. The largest? Four tonnes. You definitely build some muscles playing a carillon.

Also, there are about 112 steps in the tower. Carilloneurs at U of T must be the fittest musicians around.

It was amazing getting to see the bells and to play the carillon, even if it was just the last note of Twinkle Twinkle Little Star, but the original purpose of the carillon wasn’t to play for leisure.

It’s one thing to actually see the inside of a campus icon, but why was it built? I found the answer through another door, nestled between the tower and Hart House. Below the carillon is the Memorial Room. The walk up the staircase was sombre. The walls displayed pictures of regiments that trained or started at U of T. There are eight stained glass windows, each depicting a different part of the war effort.

Until I entered that room and met with David Platt and Malcolm McGrath, chair and past chair of the committee, I barely knew about the contributions the university made to the war effort. My U of T is a university where the weight of our lives are only limited by our imagination and dedication. Mr. McGrath’s U of T saw the homecoming of the veterans and their transition back into school and work. It’s hard to imagine that, just 60 years ago, opportunity meant a chance to return to normalcy, to return home. While for us, opportunity means a chance to become extraordinary.

I asked Mr. Platt and Mr. McGrath what the tower meant to them. For Mr. Platt, it is symbol of the fight to preserve democracy. Canada and our university showed amazing leadership in both World Wars, and the tower is a physical reminder of that. For Mr. McGrath, the tower is a reminder to students that many lives were sacrificed for our education. Without our very own going off to fight the wars, we might not have the U of T we know of today.

The sun was bright and the weather warm on my walk back to work. It was a contrast to the cool calm of the tower. I cut across Front Campus just as that day’s batch of grads walked from University College to Convocation Hall. In a year, that will be me. My thoughts lingered back to what I had learned at the Soldiers’ Tower. To the people I talked to today, it is a symbol of sacrifice. I thought about what the tower meant to me. But, looking at the the rows of graduates, the tower shouldn’t mean anything just me – it means something to everyone on campus. To the men and women who fought in the wars. To the students that walk under the archways every day. To the alum that have kept the tower in top condition. To all the future U of T students ready to find opportunity, just like the generations of students before them.

Like the thousands and thousands of students before me, it’s time for me to leave my mark on U of T history. Sixty years from now, another student might be walking up those 112 steps to the carillons and marveling at the stained glass windows. Maybe she’ll be one of the future Student Life Communications officers, and maybe this blog would be completely different – downloaded directly on to your retina or something. Even in the future, I hope that the Soldiers’ Tower and the carillon will leave her in awe, just like I was. By then, my individual mark on the university may have melded with thousands of other marks, but it’s humbling to know that, across time, I will be a part of that legacy. 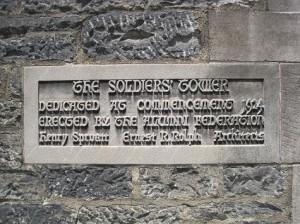 If the carillons fascinate you as much as they fascinate me, consider becoming a carilloneur. Carilloneur Roy Lee is holding information sessions on June 13 and 15 from 1 pm to 1:30 pm. He is seeking students who have some prior musical training, preferably in piano or organ. The information session will take place inside the Tower carillon area. It is free and there is no obligation to enroll. People should contact Kathy Parks in advance to register so she can know to wait at the door for you. Contact her at 416-978-3485 or soldiers.tower@utoronto.ca.

Information on Carillon Recitals during the summer:

If you would like to visit the Memorial Room, it will be open following the carillon recitals. For more information, email soldiers.tower@utoronto.ca.

5 comments on “When The Bells Toll”