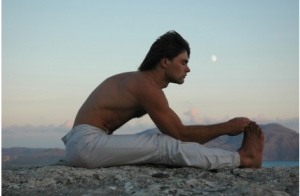 Now this might be just me, but don’t you think “Man vs. Yoga” could be the new reality TV series to kick off 2012? Okay, maybe it’s not something worth tuning into every week, especially with exams on the horizon but it is still an interesting idea!

So, I have a friend who is a man and he is very athletic and plays a bunch of sports. A few weeks ago, I was out with said man, we’ll call him G (because he’s gangsta haha not really but okay!) and some other man friends for lunch. We got on the topic of my yoga classes and I suggested he join! One of the dudes is already a yogi, or perhaps formerly dabbled in yoga, and was very supportive of the trial yoga class for G. G-dude was a bit hesitant to say the least! So I left the offer on the table and sure enough just last week he told me he was ready…to hit up hot yoga!

What’s so great about yoga for men (and women)?!

So why did G-man have the sudden change of heart? Well, he’s been feeling pretty sore after his hockey games and he’s looking to loosen up a bit. If I were to separate people into three categories, based on flexibility, I’d divide them as follows: Bendy Wendy/Bendy Buddy; Regular Cinnabar/ Regular Alamar and Rigid Bridgid/ Rigid Euclid. G would be in the latter category and I’d be in the middle. I can touch my toes, but can’t place the soles of my feet on my shoulders.  G-dawg, on the other hand, is still reaching for the floor.

Anyways we went, just to a yoga place downtown. Sadly G-man doesn’t have the benefits of being a UofT student like I do or the subsequent opportunities to enjoy reasonably-priced Ashtanga, Hatha, Yin or a combo of Pilates and Yoga classes! But we managed to find a decent deal.

How was it?! Well for those of you non-believers out there, I think he had a great time! There aren’t many groups of people more welcoming  than yogis! Everyone’s super supportive. Plus, you’re in a warm room with soothing music; it’s hard not to relax. So, if you’re a dude and you think yoga sounds intimidating, find a friend who can help you out and try a class! You never know, you might start off as a Rigid Euclid and move all the way to a Bendy Buddy in no time at all!

Best of luck in crunch time! If you’re feeling like a heavy weight, might be time to lighten up with some yoga, just sayin!