All Eyes on the Eyeball

I get this question all the time, to which I quickly utter something along the likes of “fine arts”. Read my bio to find out why… Sometimes I cut out the “fine” and just tell them I’m in “art”… to which I get the reply, “Oh. What kind of arts?”. Yes I know that the Faculty of Arts & Sciences houses a wide span of academic programs and studies, but I am in fact an art student at U of T. There is, in fact, a studio art program at the University of Toronto, although it is filed alphabetically under one of the last 5 letters of the alphabet under Visual Studies.

I once told a co-worker who studies at OCAD that I was in Visual Studies and she misheard me for saying visual sciences. “Is that what they call their art program at U of T?” she chuckled. With the academic reputation of our university, it comes as a surprise to some that there is a creative niche of art practice nestled between the rigorously academic and theory-based courses at U of T. After long nights at the studio of 1 Spadina Crescent (pictured below), I can strongly attest that there is no shortage of talent and relentless dedication in the visual arts students here. 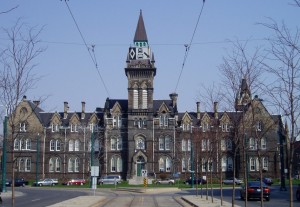 From printmaking and site installation, to painting and video, U of T’s visual studies program offers a wide variety of courses in several mediums. If you have never set foot into this building, or have seen it but never wondered what exactly it was, or if it was even a part of U of T campus… this is 1 Spadina Crescent, the Visual studies building with art studios and classrooms for many art and architecture students. I invite you to take a peek inside. You are bound to see several works of art either finished or still in progress.

On top of my informal invitation, the Fine Arts Student Union cordially invites you to Eyeball, the annual University of Toronto undergraduate art show. This year’s show will be on Friday, December 10 from 6-10pm with a cash bar and live music by Tezeta. Eyeball features final projects from all of its undergraduate students and also accepts submissions from any U of T student. 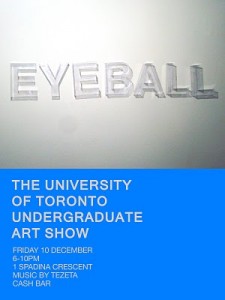 I’ve always wondered why we called this art show the Eyeball and a quick search on the Fine Arts Student Union blog confirmed that not only does 1 Spadina house the Visual Studies studios, but it is also home to the Ontario division of the Eye Bank of Canada and the name of the art show pays homage to the building’s history.

Aside from my personal convictions that the 1 Spadina building is haunted (I mean c’mon it has been around for a while now and I swear I wasn’t hallucinating during those all nighters in the studio!), other interesting tidbits uncovered from the Fine Arts Student Union blog illustrate the history of the building:

Originally home to Knox College, 1 Spadina Crescent is the distinctive Gothic Revival building constructed in 1875 that divides Spadina Avenue into two at its intersection with College Street. After Knox College became affiliated with the University of Toronto and then…

moved into its current location in 1914, the building operated as a Military Hospital during the First World War and remained as a veteran’s hospital until 1943. At this time, it was acquired by the University of Toronto’s Connaught Medical Research Laboratories for the production of penicillin. Research in these labs later led to the discovery of the polio virus vaccine. Upon sale and relocation of the laboratories in 1972, it became an academic building.

It’s kind of cool to say that I find my own artistic “aha” moments in the very building where the vaccine for the polio virus was discovered! Perhaps my co-worker didn’t quite mishear me at all for calling my program “Visual Sciences”?

What I love about the Visual Studies program at U of T is the fact that I can integrate my academic experience through other courses with the creative expression that the program allows. I can draw connections within a lot of my coursework while getting a well-rounded academic experience. Not only are the classes smaller, a lot of the faculty are practicing artists themselves who are internationally acclaimed. It is a great community and program where I have learned most importantly, how to analyze things with a critical eye.

So why not put your own critical eyes to work and swing by the Eyeball this Friday? I assure you that it will be quite the sight and sound for the senses.
– Danielle
Skip back to main navigation