You can call me Ferdinand

Actually, you might want to call me Chris, as in Christopher Columbus. My original idea for this post was an experiment to prove that you can navigate the St. George campus by bathroom graffiti alone. I had in the past noticed a correlation between bathroom graffiti and nearby departments. I came to the conclusion that it should be possible to navigate the campus only using this graffiti as a marker.

While trying to prove this theory, and in the process visiting nearly every woman’s washroom on campus, I have come to this conclusion: the University of Toronto goes to great lengths to remove graffiti in a timely manner. There was scribbling that I had seen on stalls not so long ago, perhaps a month past, which had already been studiously repainted. So, as I said, it might be more appropriate to call me Chris. I did not complete a successful circumnavigation but I did make it half way across campus. Ferdinand and Christopher navigated with stars and sextants. I navigated with lots of coffee, my eyeballs and the camera on my phone.

It begins! I started my expedition on the east side of campus, home to many older colleges and buildings. These older buildings have a characteristic that the new buildings on the west side do not have: stained wood bathroom stall doors. It might seem insignificant, but it proved to be the thorn in my side. These older wood doors have years of graffiti carved into them that stain or paint cannot conceal. The new metal doors are easily painted over and the graffiti is lost.

I started out on in the Pontifical Institute for Mediaeval Studies . Inscribed on the stall door was this biblical quotation: 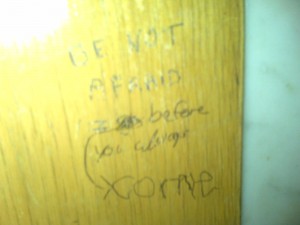 It says, “be not afraid I come before you”. Eureka! I was now confident in my theory. I had proven it in this stall. But, I needed more evidence to support the claim. I travelled to another building within St. Mike’s and found “semper” etched into a stall door. Latin! I had done it again. I was as excited as one could be in a bathroom stall. I decided to move west, so of course, I hopped on the TTC at Museum and travelled to St. George Station. I then proceeded to visit every woman’s washroom in any building that fronts onto St. George Street. It was not until the end of the afternoon when I had nearly reached college that I found the next marker. In the anthropology building on Huron, I found the graffiti below. 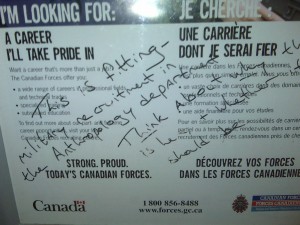 This was by far the most direct statement I had found. It actually told me what department I was in. This was great because by this point I was in a trance and had actually stopped looking at the signs on the buildings. I ended my journey at the Multi-faith Centre on Spadina. It is interesting to note that in a building where religions and ideologies converge in a peaceful discussion the washroom had no graffiti of any type. Where was I if I wasn’t here? Was I really having an existential crisis in the bathroom? With that I was done.

The interesting thing is, I started out on this grand voyage with a destination in mind. Yet, just like Chris, I ended up in a completely different place than I had intended. My theory doesn’t really hold up to scrutiny. But again just like Chris, I did discover some new places. I found 10 new coffee stands, a bunch of rocks with labels on them (which I assume are examples of indigenous rocks), one of those new Dyson hand dryers that looks like prop from Star Trek and a huge single use washroom in the forestry building.

It is possible to partially navigate around the campus by graffiti. Sure it might be easier to look at a map or the sign in front of the building but that’s not as much fun. Perhaps, I subliminally came up with this blog idea so I could aimlessly roam around campus visiting toilet stalls. I might have been procrastinating instead of writing an essay that is due next week. I have to say, there is something very theraputic about roaming around campus.

Who knows maybe I’ll start a new club…”The Campus Toilet Stall Orienteering Club”. That’s has a nice ring to it!

2 comments on “You can call me Ferdinand”