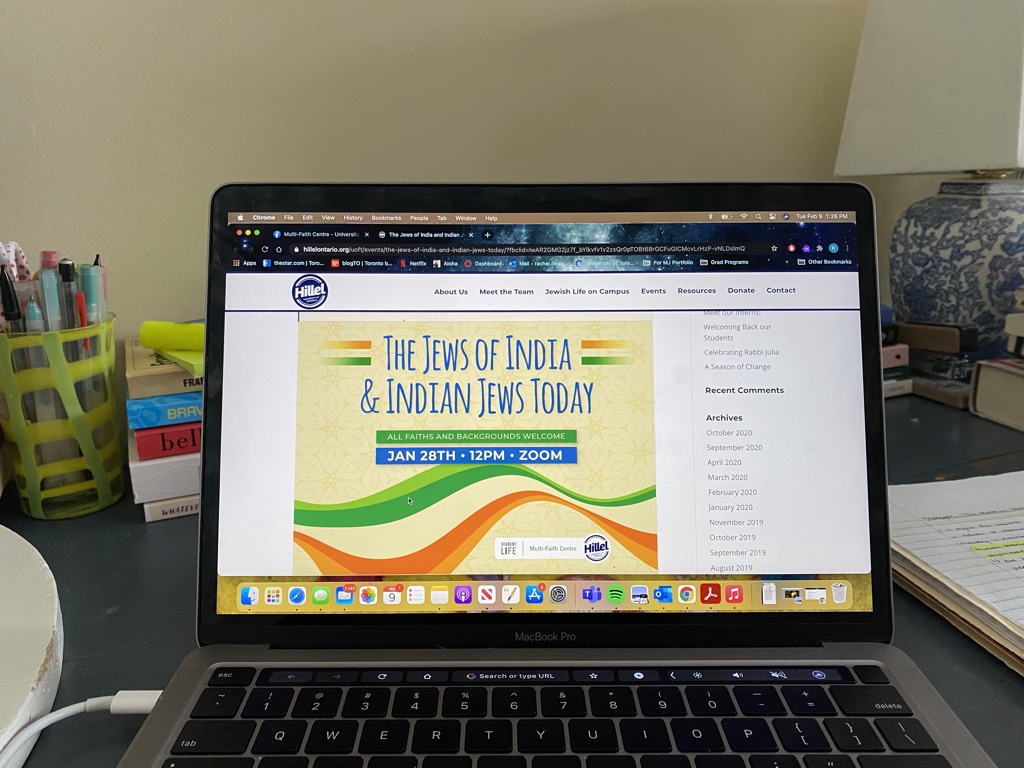 Attending the “Jews of India and Indian Jews Today” Event!

India is known for its religiously diverse population. Yet, the small Jewish community in India is often forgotten or ignored due to the country’s large population of over a billion people. Regardless, Jewish people have resided in India for approximately 2000 years, leaving behind a rich Indian-Jewish culture that carries on today through the practices and traditions of Indian Jews from all over the world. I was fortunate enough to attend the “Jews of India and Indian Jews Today” event, which dove deep into the history, culture, traditions, and personal experiences of Indian Jews, and how they both celebrate and navigate the intersection of their cultural/religious identities.

The event began with a historical overview of Jewish settlement in India from Dr. Shalva Weil, the Senior Researcher at the Hebrew University of Jerusalem. Dr. Weil explained that there were two major Jewish groups in Mumbai: The Bene Israel and the Baghdadi Jews. The Bene Israel arrived 175 BCE on the Konkan Coast via shipwreck, where many unfortunately died and were buried. Those that survived eventually moved away from the Konkan Coast to Bombay, known today as Mumbai, where they remained. In contrast to the Bene Israel, the Baghdadi Jews were only in Bombay for approximately 100 years, and migrated from many different countries, such as Iran, Afghanistan, Syria, and Iraq. Despite their relatively recent arrival, they contributed beautiful monuments to India’s landscape, such as the Gateway of India, which retains symbolic significance within the Indian Jewish community today. Although both groups contributed greatly to Indian society, following India’s Independence, much of the Jewish community has since migrated to Israel or English-speaking countries, such as Canada.

The following presenter, Ann Samson, was one of the Indian Jews who immigrated to Canada following Partition. Growing up in India, Ann described her childhood as being peaceful, with strong communal bonds within and between different religious communities. Ann told event attendees that little attention was paid to religion or skin colour when forming friendships with others. She recounted that her Hindu, Muslim, and Christian friends would share sweets on religious holidays. Moreover, she recalled that Muslims and Hindus have been regularly taking care of Jewish synagogues for centuries throughout India. Unfortunately, when Ann left India she was not welcomed with nearly as much acceptance in Canada. Ann remembered experiencing no anti-semitism in India, yet upon arrival in Canada, she felt rejected by both Canadians and by Jewish-Canadian communities. She remembered being told that she could not be Jewish because she came from India. In spite of this, Ann continued to practice and teach Jewish customs and traditions to her children, commenting that she wanted her children to grow up proud of their religious and cultural ancestry.

The following speaker, Judith Dworkin, also spoke about the significance of passing down traditions to the next generation, mentioning how important it was for her children to understand and continue to pass down the customs, foods, songs, and stories of the Bene Israel. Judith primarily focused on her personal experience growing up in several Jewish communities. Judith expressed that, after frequently moving around and being a part of many different Jewish communities, she quickly realized that the Indian Jewish population was incredibly small, noting that her family was sometimes the only Indian Jews within the community. This intersection of Jewish and Indian ancestry made her question her identity, especially considering many had difficulty believing she was Jewish because she appeared Indian. This prompted her to learn about Jewish ancestry in India, so she could teach others who were unfamiliar with Indian Jewish history.

Similar to both the discrimination Ann faced in Canada, and the identity questions Judith confronted, the event’s youngest and final speaker, Anna Rajagopal, spoke of their experience being ostracized from several communities as well. Anna is a student and activist contributing to an online community for Jews of Colour, seeking representation, connection, and friendship over social media. Anna is a Tamil Jew and converted to Judaism when they were only ten years old. Anna explained that they experienced racism and anti-semitism from American society, as well as intolerance from within the Jewish community for being a converted Jew. Anna described that some refused to accept them as being truly Jewish because they were not born Jewish. Anna did, however, emphasize that the discrimination they faced from the Jewish community was a small minority of Jews, and that it was not representative of the Jewish community as a whole. Nonetheless, the criticism and alienation from all groups made navigating the intersection of their Jewish and Indian identity difficult and complex. Today, Anna can find this sense of community on social media, where they can see faces and hear stories similar to their own.

The intersection of Jewish and Indian identities in North America has not always been positively received, and is often met with confusion, if not outright discrimination. Yet, Indian Jews across the world continue to hold onto their Indian-Jewish culture, passing it down to the next generation, and finding new ways to build their community and maintain their traditions.

https://uoft.me/mfc-calendarSkip back to main navigation

0 comments on “Attending the “Jews of India and Indian Jews Today” Event!”