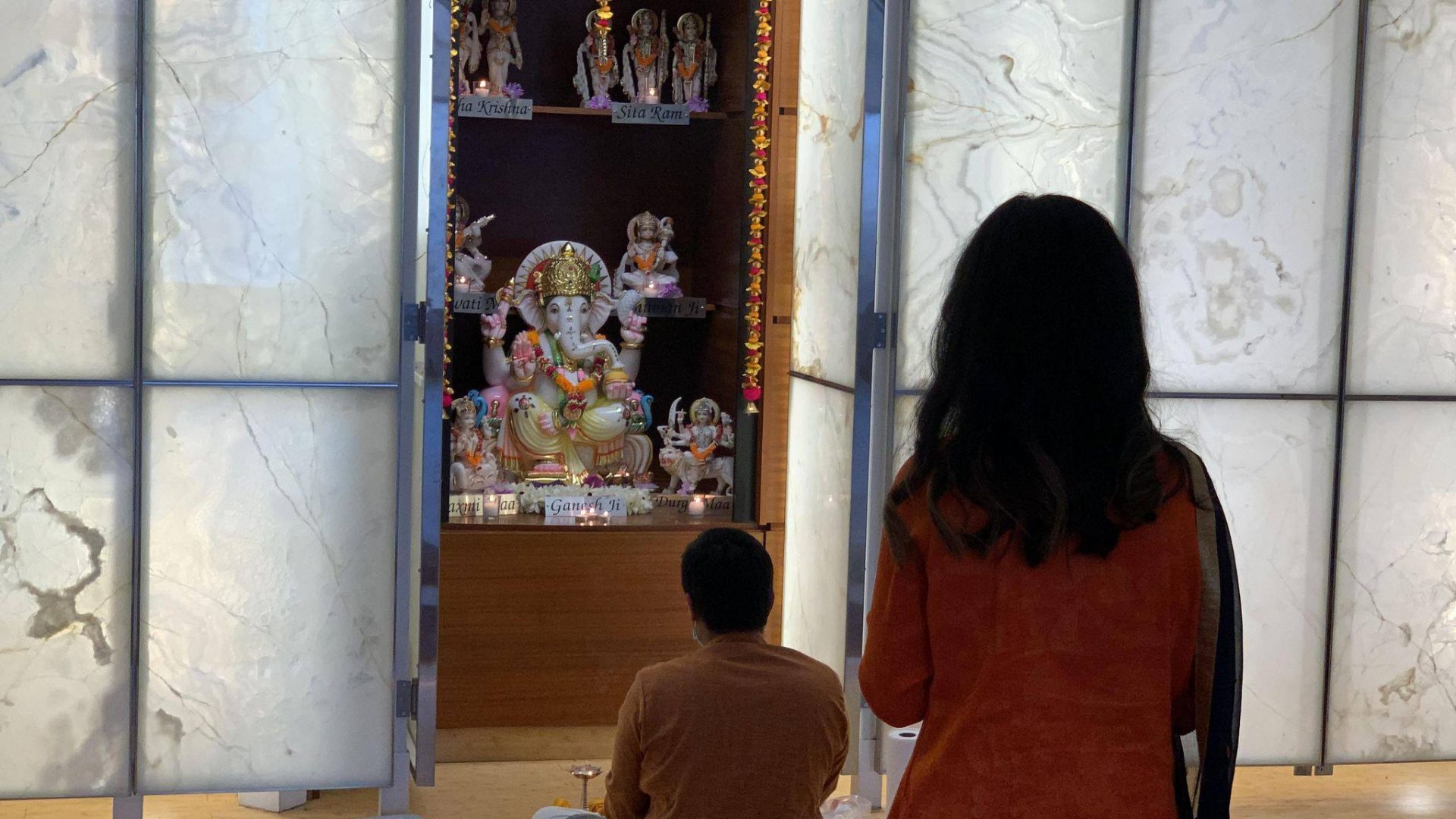 This past November, the Multi-Faith Centre completed the building of a Hindu shrine. The shrine features seven murtis, which are Hindu deities, that are now located in the Multi-Purpose Room at the MFC, where prayer and worship can take place. Despite the impact of COVID-19, the project was a huge success, with a small COVID-friendly celebration that occurred on November 14th. The project was led by a group of Hindu student volunteers, including Anvesh Jain, who gave the inauguration speech at the opening of the shrine. In celebration of this achievement, Anvesh was kind enough to answer some questions of mine regarding the project.

Do you mind telling me a bit about why you and other members of the project committee wanted to establish a Hindu shrine at the MFC?

Anvesh Jain: When the Multi-Faith Center was first established, and the Main Activity Hall was built, they were already thinking back then about making space for a Hindu shrine. After such a long while, the idea was brought up again, and so the MFC reached out to the community about convening a student-led committee to oversee the project. We wanted to do this as a marker of representation, to show that Hindus are one of the largest faith groups around, and that we’re committed to preserving our culture and traditions within the wider fabric of Canadian life. Now students will be able to gather in a religious context for major festivals like Diwali and Holi, and the shrine can serve as a space for comfort and communal belonging. We felt that we were contributing to something greater than us, something that would go beyond just our time at UofT.

How did you go about installing the shrine? What was the process like? How long did it take?

A. J. : Realistically, it was a process that took many months. The committee was convened in early 2020, and we had to start from scratch. That meant taking physical tours of the MFC to find a suitable space, and running into unexpected problems like making sure the direction of the shrine was in accordance with Hindu architectural scriptures (Vastu Shastras). Then there was the question of picking which murtis of deities to represent, which can be quite difficult when trying to capture the sheer breadth of Hindu worship and experience. Finally, we had to determine a feasible budget for everything, since much of the project costs were to be funded on our own.

Over the course of the summer, we reached out to suppliers both in India (for the large centrepiece Ganesh murti), as well as local GTA stores for the six smaller murtis. Then by the return of school in the Fall, a lot of the logistics began coming together around our online fundraising strategy, the date for the inauguration ceremony, and the ceremony itself.

Did you receive a lot of support/help from outside the project committee?

A. J. : Tons! Though the project committee coordinated most aspects, the project as a whole would have been impossible without the generous support of both the University and the global Hindu community. We had 68 donors through our GoFundMe page who covered the bulk of the costs for decorations and the murtis themselves. Richard Chambers of the MFC was an incredibly supportive and helpful figure, and he helped us navigate the process at every turn. We owe so much to him, and he has our gratitude, especially in covering some unexpected contracting fees that cropped up in the latter stages of the project.

Then there were others from the MFC like building managers and contractors who arranged for us to visit the site under COVID conditions, and helped make architectural adjustments to the shrine including a functioning security gate. We had to reach out to higher-ups from the Faculty of Arts and Science to get permission to conduct the ceremony on Diwali with a small group of students – and of course, the rest is history!

Did COVID hinder your plans at all?

A. J. : Very much so. Our original plan was to inaugurate the shrine sometime in early summer, around when school was out after winter semester. That got pushed back, and then much of our communications and organizing had to go online and across continents over the long break. In fact, between March and October I don’t think we even had the opportunity to meet physically. COVID changed some things, and it made the inauguration ceremony much smaller than we were hoping. Ideally, we wanted the shrine to be open to continuous student use, but that will now have to wait until post-COVID (whenever that’ll be).
While COVID did change our plans, I’m glad that everything shook out the way it did in the end. The timing lined up with the auspicious occasion of Diwali, and I think people felt hopeful and happy that life and project-work is still ongoing in the midst of the pandemic. To me, that’s entirely the point of religion and exercises in faith – a method of bringing hope to the spirit and a sense of togetherness in times of trepidation. We’ll get through this, and when we do, we’ll celebrate with ladoos and sweets at the MFC Shrine in the upcoming year, God willing.

Hopefully the Multi-Faith Centre will reopen in the not too distant future so that the shrine can be appreciated by the broader community. Thank you again and congratulations, Anvesh!

*all images are curtesy of the Murti-Project–University of Toronto*

0 comments on “The Multi-Faith Centre’s New Hindu Shrine: A Conversation with Anvesh Jain”