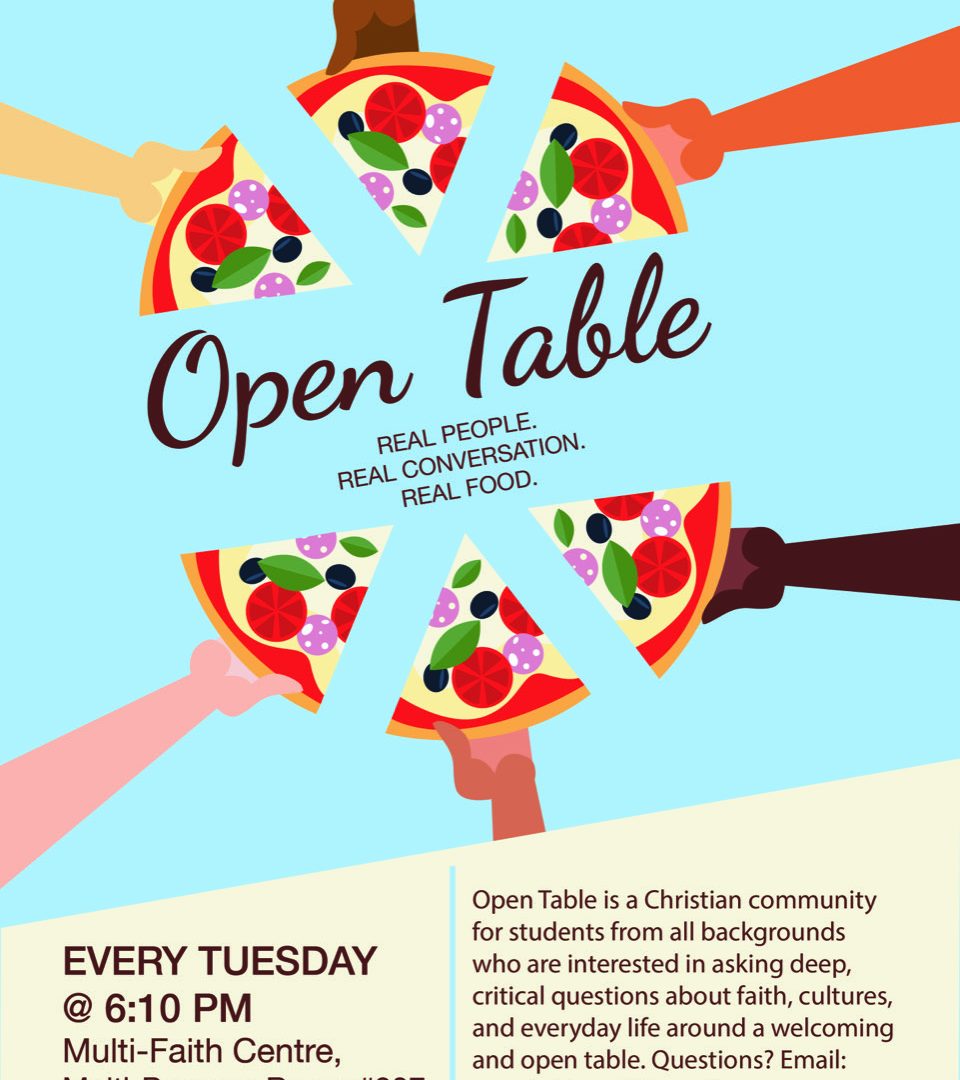 This past week, I had the pleasure of joining the Open Table group on campus. The Christian-based community centres on inclusivity, open dialogue, exploration of faith and identity, and also includes dinner! To those who are interested, the group meets every Tuesdays at 6:30pm at the Multi-Faith Centre. The community focuses heavily on welcoming and embracing everyone who wants to come to the Open Table and engages in interesting conversation pertaining to faith, culture, and humanity.

In this session, we read Matthew 6:1-6 and 6:6-21, which looks at altruism and countering hypocrisy in religion. Before discussion, the group lit candles and said a short but sweet prayer about Love being present at the table, and that Love welcomes everyone. The kindness in the group pervaded group discussion too. One of the questions asked was what we treasure in God, and many group members said that giving and receiving radical Love was a shocking and deeply desirable feeling. In a world where judging ourselves or others can be a bit too easy, the idea of unconditional love, acceptance, and forgiveness is incredibly freeing and comforting. After the prayer, the group serves themselves the buffet-style dinner and, this week, it was a mix of Chinese and Indian cuisine. 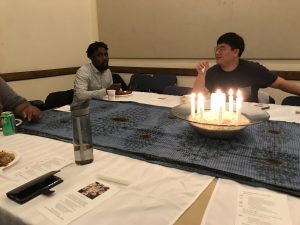 Once the group is finished eating, we read the passage aloud. We were asked to share our initial reaction to the text or answer some of the proposed questions. The first question was “have you ever felt like you’ve practiced acts of righteousness in front of others to be seen by them?”. I really enjoyed this question because it forced me to reflect on the ways I’ve done “good deeds” for non-altruistic reasons. I confessed that sometimes it felt like I did acts of kindness to feed my own ego, where I wanted to be seen, or see myself, as a morally superior person. Although I don’t often share my good deeds with others (because I know that this erases pure intentions), I still have an intense desire to be acknowledged and feel validated for my generosity/helpfulness/kindness. In contrast, others related this question to acts of holiness that they felt were sometimes done in bad faith, or in periods of their life when they couldn’t fully appreciate their connection with God.

The questions were really personal but also very broad, and many of the enquiries could be interpreted through alternate lenses. An important thing to keep in mind is that, although the club is a Christian group and the readings will pertain to Biblical scripture, the questions asked can be tailored to people of other faiths. For example, two people in this week’s group were either atheist or agnostic. Many others had also expressed feelings of being removed from Christianity, either presently or in the past. One of the other questions asked — “when and where do you find yourself praying?”, could be framed in a different, more inclusive way, such as, “when and where do you find time to reflect?”. Almost every question could be opened up to include those who may not relate to the Christian context.

I’ve found many groups like this at the Multi-Faith Centre, where people from many backgrounds and life stories go beyond the superficial questions and get to know one another at a more intimate and personal level. This doesn’t mean that conversation can’t be light and fun too though. From comparing airlines, to where people travelled over reading week, to Parasite, the dialogue could travel in many different directions. However, hearing the personal experiences and opinions of others regarding important matters like faith, philosophy, insecurity, fear, etc. was refreshing and enlightening. I highly recommend attending the group’s meetings if you want to experience their warmth and fascinating discussion for yourself!

0 comments on “Joining the “Open Table””