Nuggets from the 2017 Hancock Lecture Language is a river that flows and is ever present in all aspects of my life. As a blogger, it allows me to express my experiences and world views with those who read my posts. As a student, it is the vehicle in which I accumulate and contribute knowledge to an ever growing body of understanding. As a human, it connects me with others; allows me to empathize and sympathize; and lets me share and create valuable memories with friends, acquaintances, and even enemies.

Language is a powerful tool–a privilege, and I often take for granted the ease of which I am able to navigate through the world because of my fluency in a dominant language. I often have to remind myself that my language is but one of many. In fact, more personally, English is but one of two languages that make up my identity.

On Tuesday, amidst a frigid rain that almost froze my fingers solid, I made the effort to attend the 2017 Hancock Lecture in Hart House Theatre. Soggy and cold, I held high hopes for what I was about to hear, because the lecture’s topic was one that struck a strong chord with me: Land & Life in Tkaronto: New solidarities towards a decolonial future. 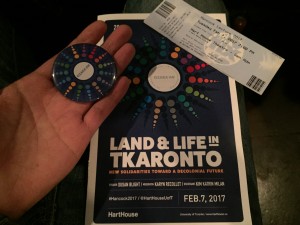 The opening of the lecture set the tone for what I knew would be a great experience: a land acknowledgement, a prayer and a cleansing smudge. This opening lead the way for the lecturer to take the lectern with a calm command. Susan Blight, an Anishinaabe visual artist, film maker, and arts educator, walked into the spotlight with a glass of water in her hand. She looked at the audience and introduced herself, communicated her recognition of her status as a visitor to the territory, and acknowledged the treaty of respect that she intended to abide by in the same way her ancestors have since before Canada was even a spark of a nation. Then she did it again, but this time in English.

Susan Blight’s lecture focused on the importance of language and creativity in the process of decolonization. Both are vital to the Ogimaa Mikana Project, an activated project she co-founded which reclaims Anishinaabe territory through the process of renaming (or rather restoring) roads, streets and landmarks with Anishinaabemowin. To Susan, the Ogimaa Mikana Project is more than just about raising awareness, it is about reclaiming space and visibility by a people largely made invisible due to a colonial history.

Throughout the lecture, Susan spoke about her process of decolonization, not just through the Ogimaa Mikana Project, but also on an internal level. She spoke about the process that compelled her to learn Anishinaabemowin. She spoke about how her culture’s language revealed to her so much about Anishinaabe philosophies, world perspectives, and politics. In essence, it activated a deeper understanding of her decolonial identity. 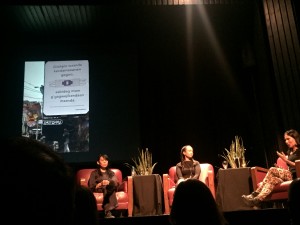 The process of decolonization is transformative: a decolonial future requires a high degree of transformation in many, if not all aspects of society. But to transform the world, it is necessary to transform yourself first. This is what I walked away from the lecture holding on to.

I myself, a Filipino-Canadian, have an identity that is shaped by a long history of colonization. I rarely think about this because I’ve assimilated quite well to the customs and cultures of Canada. So well that I consider the Canadian side of my identity to be the dominant side. But after this lecture, I’ve started to reconsider whether I really understood as much as I thought about my identity. Perhaps the answer lies within what Tagalog can reveal to me about Filipino philosophies, world perspectives and politics. In this way, perhaps I’ll gain a deeper understanding of my own decolonial identity: one that rests square on the hyphen, a harmonic blend of Filipino–Canadian.

0 comments on “Nuggets from the 2017 Hancock Lecture”