Last Friday, MoveU hosted a Fun Friday event at the Goldring Centre for High Performance Sport: Balley Ball! Picture volleyball, but instead of using your hands to send the ball over the net you use inflatable medicine balls! Here’s a demo. 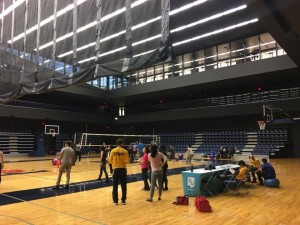 Coming into the event, I anticipated this being a true feat of coordination, but most people quickly got the hang of it. I was a little slower to learn but it was still a lot of fun and there were lots and lots of laughs and just as much cardio as we chased after the volleyball we’d accidentally sent flying across the field house.

I had a friend come out with me and I think she had just as much fun. Personally, what I really enjoyed was the atmosphere – it was laid-back and we were playing with students we didn’t know from all over campus. It felt very relaxed and made the large university seem a lot smaller for that little while. It was also a brilliant way to de-stress and expend some energy after a long week.

There are only so many exercise balls on campus, so we rotated between playing balley ball and the more traditional volleyball “keep-ups.” I had a blast participating in both games, I played volleyball on a school team in elementary school for two years and hadn’t realized how much I missed the sport. 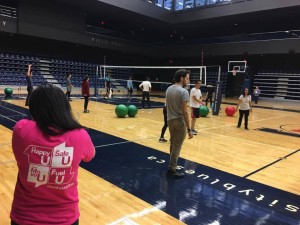 Many people seemed to have come out to the event alone, which was really great to see. The whole event was very welcoming and inclusive and it seemed like everyone had a stellar time – regardless of their age, background or fitness level.

Jenny Chin, a fourth-year undergraduate student in the faculty of Arts & Science had this to say: “I really liked it. I’ve never played balley ball before, so it was a brand new experience. The atmosphere was really chill, nobody was an expert at controlling their yoga ball so the volleyball was constantly going in every direction. It was a lot of fun!”

To make sure you don’t miss equally-awesome, future MoveU events, be sure to follow the MoveU Facebook page. Upcoming events include “Skate n’ Create”, part of the MoveU free skate series, and “Brain Break,” which will include a variety of activities taking place in December at Robarts to support you through the final stretch of the fall semester.

PS, if you’ve never been to the Goldring Centre – especially the beautiful Kimel Family Field House pictured here, you should know there are weekly drop-in hours for volleyball and basketball. You can borrow a ball with your TCard and enjoy the facility that is home to our basketball and volleyball Varsity teams. This a theme across campus – remember these facilities belong to you as much as they belong to our athletes.