There are a couple ways to approach your exam season inspired by prominent Game of Thrones characters. Please note that it is not advised you include these approaches in your study regime, now or ever. (*Stark Approach excluded)

Gather a small (but attractive) army of well academically trained students who will promise to study with you every night until your exam. Your recruits are so great at being prepared students, that you’re pretty sure that they are more invested in your success than their own. Intelligence aside, they are easy on the eyes and will give you their study snacks if you ask with enough authority.

While not favourable in many social circles, as it requires sneaking, lying and general debauchery, the Lannister approach may be the most effective. For the best results, it is suggested you acquire a large inheritance so that good grades would only make you more powerful, which of course, you almost crave. To achieve good grades, you must make “frenemies” with only the best note-takers. Once the notes have been shared, you definitely do not say thank you. This approach may or may not require you to fake your own death.

Start off by recognizing that exam season is just another season, and one that you cannot avoid if you are going to be a student of the “Great North(ern)” University of Toronto. You prepare for your tests with diligence, all the while managing to help out your study-friends-in-need… even those who have utilized the Lannister Approach this semester. You believe in yourself and you commit to your studies with honesty and passion. There is a large chance you will also develop an affinity for large snow coloured dogs.

During this difficult time, it is easy to lose sight of our actual goals. Are we only easily replaceable minds trained to regurgitate information by choosing (a), (b), (c) or (d)? Is my only identity a soldier on a mission to create the perfect essay thesis? The answer may be yes, but only for a short while. The summer months lay ahead, and unwavering dedication will provide great rewards for those who can commit to their exam season in all it’s stressful glory.

Our reward? The university student equivalent of the Iron Throne; a finished semester.

The best part of our version of the Iron Throne is that once attained, it is just as grand and comes without the threat of an imminent beheading. 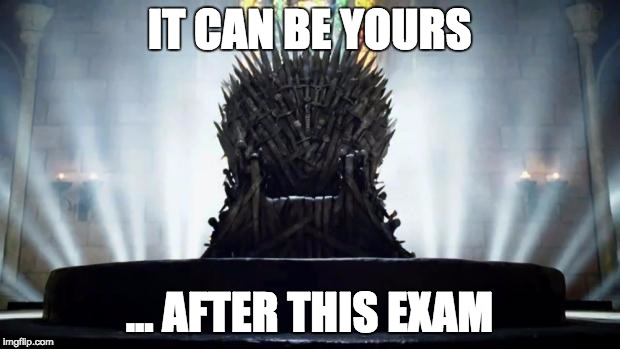 So carry on and study hard, fellow students… For exam season is long and full of terrors.

0 comments on “Game of Groans: an exam themed parody”