U of T’s Ivy envy

Hello friends and fellow U of T devotees. By the time this is posted, I will be far, far away, in a land not so different from ours geo-politically, nor in climate. They speak the same language there, and by and large do the same stuff. But, for all intents and purposes, I will be worlds away.

That’s right, my northern colleagues, I am venturing to Princeton — one of the eight famed, revered Ivy League schools, and as fetishized as education gets.

A bit of background: as I’ve mentioned, I fell in love with political theory within my Poli Sci & Economics specialist, and I chose a good place to do so. U of T has an incredible political theory enclave within the Poli Sci department, boasting several giants of the field and some very interesting courses. In two of these courses, the profs ended up recommending me for a summer program in the field.

When I looked into it, the program looked incredible: 11 (not-for-credit, all expenses paid) days of seminars, panel discussions and advisory sessions held at Princeton by an independent institute which gathers together faculty from Yale, Harvard and Columbia, to name a few. The application process was a bit intense and I basically thought I had no shot looking at the people who had attended in the past, but I tried and lo and behold, a few weeks later got a very official-looking acceptance letter.

Now, I’m ready to head off (or, for you, already there, meta) and kind of freaked out. Almost all the other students come from the Ivy Leagues, with a few wayward kids from NYU and two U of T-ers (myself included). And even though I know U of T is very old, well-respected, prestigious, etc, I read that people are coming from Harvard and feel extremely humbled. Realistically, studying philosophy at U of T is not so different from doing so at Yale, but doesn’t it feel different? If my resume boasted a scholarship from Columbia, wouldn’t it just look more impressive?

And the sweatshirts. What is it about their name that looks so much better on fleece? 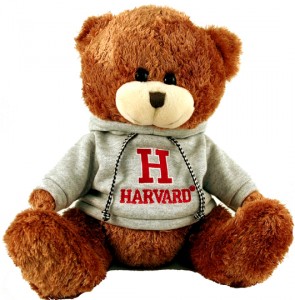 Don’t get it twisted, I’ve loved my time at U of T. The profs, combined with the resources I’ve had access to, and the diversity of the community (and all at a relatively bargain price) have been incredible, and I wouldn’t transfer for anything. So, why do we still suffer from Ivy envy?

In fact, U of T’s academic standing is extremely high on an international scale, and our reputation is pretty darn good across the board. Why don’t we have the same puffed-up pride? Are we just too Canadian?

Is it just me that suffers from Ivy envy?