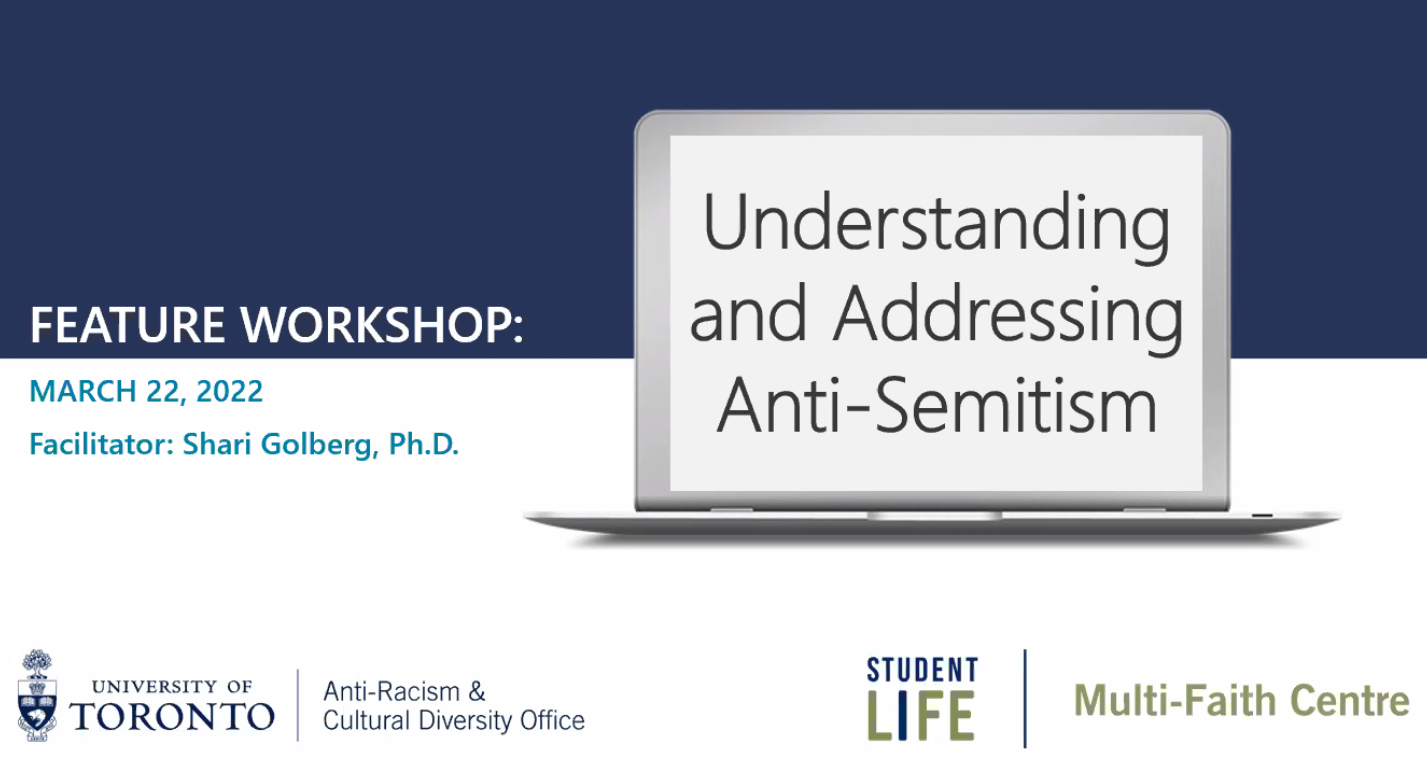 Recently, I had the opportunity to attend a lecture on “Understanding and Addressing Antisemitism”. The session was facilitated Dr. Shari Golberg, a team lead in the Ministry of Labor, Training and Skills Department who has also worked in academia and as a researcher for numerous organizations. Furthermore, Dr. Golberg is one of the pioneers behind the Jewish- Muslim text project, “Blood, Milk & Tears”, allowing these two communities to come together to share mutual concerns.

In today’s modern context, with the high amounts of soci-cultural tension and discrimination existing around us, concerns about Antisemitism are increasingly relevant and necessary. However, as Jewish human rights NGO T’ruah states, “diagnosing Antisemitism is not as simple as taking a covid test” as it can take many forms and might not present itself overtly. The complexity of this issue is largely what Dr. Golberg’s lecture focused on in an attempt to begin addressing some of these concerns and finding a way forward.

We began by watching a clip from “As Good as it Gets” and then entered break out rooms to discuss the ways in which the scene does display Antisemitism. This was a great, hands-on way to begin engaging with such a large and complex issue. We discussed some of the stereotypes that the scene perpetuates and how it reveals the normalization of seeing Antisemitism in society, where often by-standers are not really affected. It highlights the unfortunate reality that this still happens today, raising the question of how far we really have come as a society.

I, personally, found the discussion of the power of an image in achieving different social impacts and the way a description of a physical trait can become harmful to be very impactful and eye-opening.

We went on to discuss some of the subversive ways in which Antisemitism is enacted in our society. Trends in online communication can be a means to facilitate online harassment. The triple parenthesis, for example, are used to refer to someone Jewish by white supremacist groups to avoid anti-hate software. These codes are covert ways to allude to Antisemitic movement and ideologies, highlighting the way Antisemitism can be codified to be covert.

The important question thus becomes how can we tell what acts are Anti-Semitic? Sometimes, definitions do help but equally they can be limiting. There are various definitions that exist of Antisemitism and a popular one for its generality by the Jerusalem Declaration on Antisemitism. They assert that “Antisemitism is discrimination, prejudice, hostility or violence against Jews as Jewish.”

The vast majority of Antisemitic incidents worldwide, however, still fall outside of this scope and this does suggest that definitions are and can be limiting. Dr. Golberg included a quote that stuck with me and captures this idea – “Antisemitism appears in a wide range of forms. It can be a “hydra with many heads,” emphasizing the need for vigilance and continuing education.

In order to combat the multi-faceted forms of Antisemitism, Dr. Golberg proposes the need to understand “what category is Jewish?” Can we classify “Jewish” as religion, ethno-culture, racism or a combination of all? The answer to this question is that it is deeply complicated but the fact remains that in order to constructively discuss contemporary Antisemitism, there needs to be an understanding of the history of these three concepts of Jewish identity.

Dr. Golberg’s lecture highlights that while the work against Antisemitism is ongoing and still an uphill climb, education continues to be a means of advocacy and an important process as we strive towards a more equal and accepting world.

0 comments on “Understanding and Addressing Antisemitism”