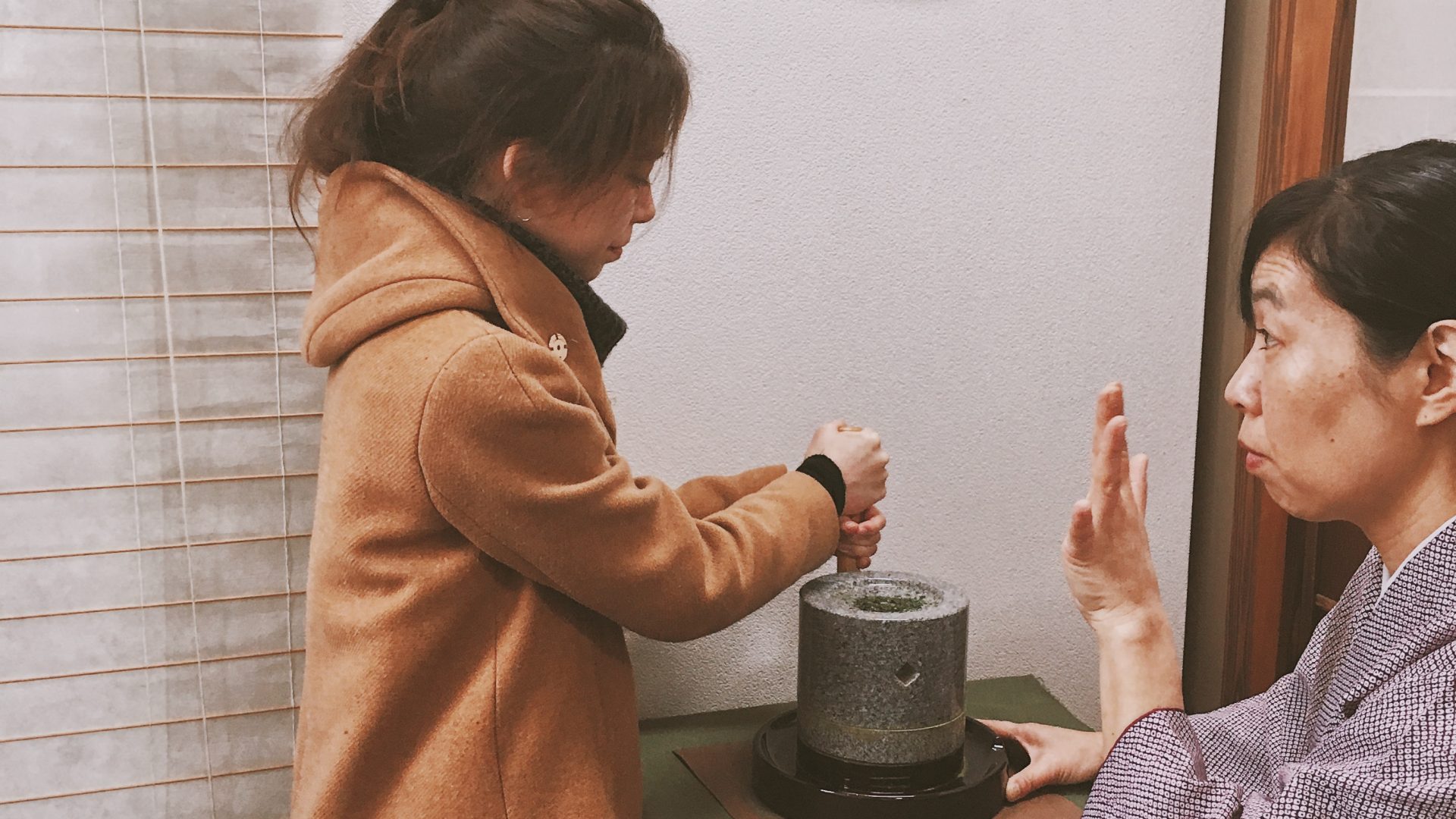 Culture shock is an infamous aspect of the exchange experience. It’s no secret that living abroad can bring on homesickness, but it also presents a chance to learn about another culture, first-hand. Being half-Japanese, I didn’t experience culture shock, but spending this year on exchange is the first time I’ve lived for a long-term period in Japan. As such, there are still many aspects of Japanese culture that I’ve yet to experience. This week, I’ve been making the most of spring break by trying to explore aspects of Japanese culture that I haven’t experienced before.

This week I participated in my very first Japanese tea ceremony class. This traditional practice dates all the way back to the 9th century, and today is enjoyed by many as a hobby. We started off by grinding green tea leaves to make our own matcha powder. Following this, we entered a tatami room, and were encouraged to maintain a calm and peaceful energy. We then ate wagashi, traditional Japanese sweets, and prepared the matcha. Every element of tea ceremony has significance, from the way you prepare the tea to the way you hold the cup. Unfamiliar with the ritual, I made my fair share of mistakes. Regardless, I enjoyed everything about tea ceremony– most of all, the calm atmosphere and the wagashi!

Ever since arriving in Japan, I’ve wanted to make my way to a kabuki performance. Kabuki is a classical form of Japanese theatre that involves elaborate costumes, sets, and music on traditional Japanese instruments. I initially did not think I’d be able to see a kabuki performance, knowing that tickets are expensive. Luckily, rush seats and the fact that it’s the off-season for tourists left me with enough money to come again!

Heading to kabuki is typically a full-day affair, with two to three separate stories and intermissions. This makes it much longer than your average western play or musical. I arrived at the Kabukiza Theatre in Ginza, Tokyo at 10:30 AM, and left at 3 PM! Of the three stories told in the performance I watched, my favourite was a comedic tale of a woman who tricked a man into vowing to marry her by disguising herself as someone else! It was easy to appreciate the plot of the story with the help of an English subtitle screen I rented at the theatre. While I can usually understand spoken Japanese, kabuki is difficult to understand because the plot is sung by a narrator. I was glad I chose to rent the screen, because it helped me enjoy the performance, without having to worry about what was happening.

Growing up near the GTA (Greater Toronto Area), my family often celebrated Japanese holidays by visiting the Japanese Canadian Cultural Centre in Toronto. One of the celebrations we never missed was Hinamatsuri (Girls’ Day) each year, on March 3rd. In our home, we set up hina dolls, which include an emperor, empress, and attendants on red carpet. This year marked the first Hinamatsuri I spent in Japan. Upon the recommendation of my obāchan (grandmother), I visited an exhibit of Hina dolls at Meguro Gajoen Hotel, Tokyo, a building I’d walked by before but had never thought to go inside. I was shocked to find that the hotel’s modern exterior hid a beautiful series Japanese banquet rooms from the 1930s. Displayed in the rooms, I saw just how beautiful the hina dolls can be. While I loved most of the dolls, some of them were perhaps a bit too life-like for my liking!

From realizing the hidden historical beauty of a nearby hotel, to finding out I had enough money for kabuki tickets, made me pause to reflect on my exchange experience. I realized that you never know what you can expect, and I will definitely be keeping a closer eye out for more hidden treasures and opportunities to experience Japanese culture while I’m on exchange.