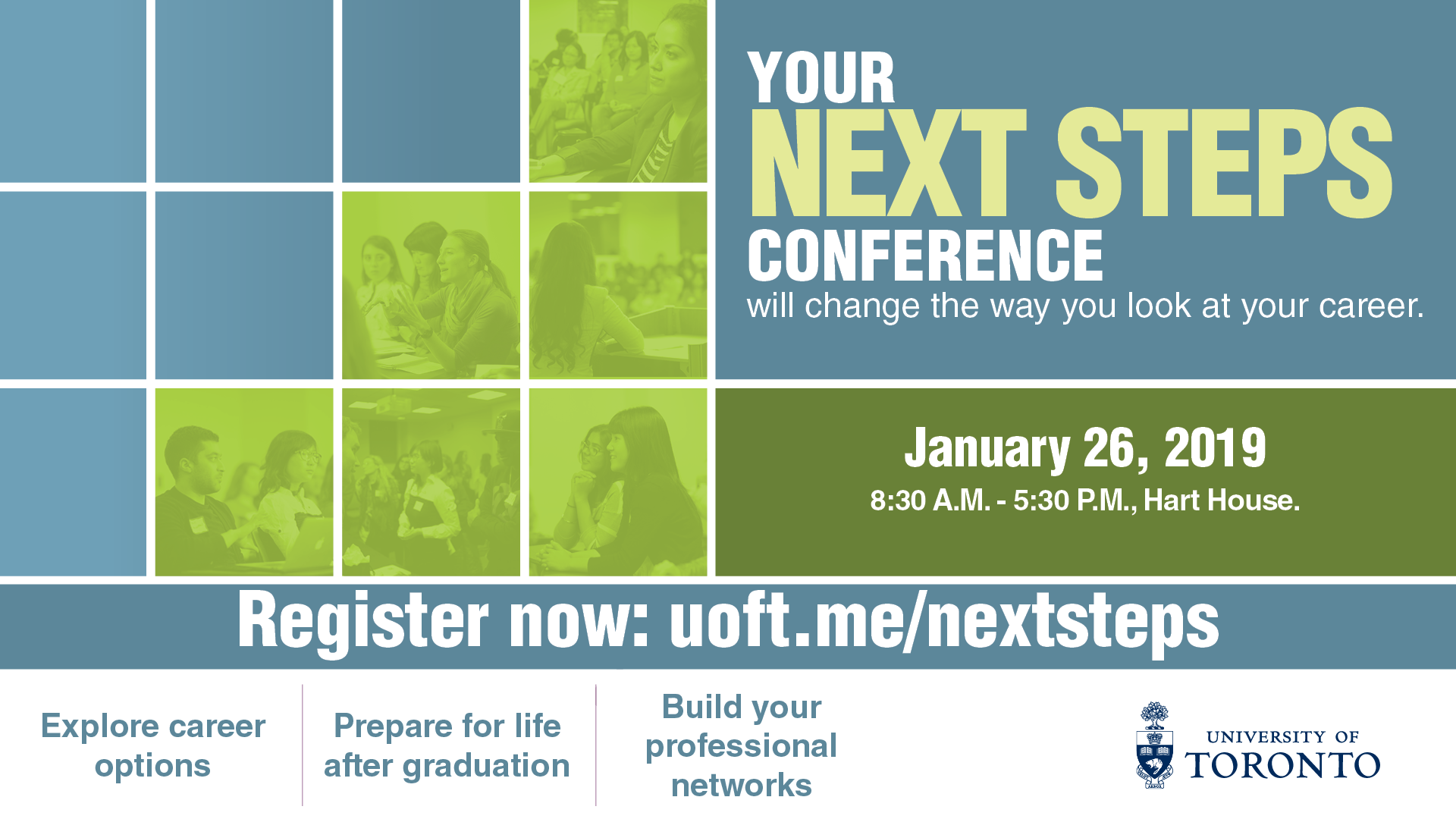 Why networking is scary-but doesn’t have to be

So, I don’t know about you, but networking terrifies me. Not that I’ve actually ever done it much (you know, because I’m terrified.) There’s something so intimidating about approaching random strangers and having a conversation, especially when it’s someone who has an actual grown up job. What questions do you ask, what if you have food in your teeth, what if they think you’re super boring, or worse, what if they’re super boring and you have to pretend to be interested in them?! Please somebody tell me I’m not alone here. As you might imagine, I’ve tended to avoid those kinds of events. However, I’m now in my last semester of school, and the real world is fast approaching. So I decided it was time to put on my big girl blazer, brush my teeth twice, and give it a shot.

Before I let myself think of 20 reasons why I could potentially be busy, I registered for U of T’s Next Steps Conference. I attended a few different panels and the networking reception. My favorite panel I went to was called “Work or More School.” The panelists all had varying levels of education: two had Ph.D’s, one had dropped out of law school, and one had gone to college following university. One of the main themes that emerged throughout the discussion was that transferrable skills may be more important than the skills you gain through your education.

I think there’s this tendency to attribute so much weight to our degrees, which then leads to a not-so-subtle ranking system of who’s degree is worth more. Humanities grads are often belittled, because while they’re exploring the more philosophical, shall we say, fluffy topics of the world, the engineers, computer scientists, and biochemists are getting down to work. The panelists emphasized over and over that many employers are actually interested in softer skills: do you communicate well, can you work as a member of a team, are your writing skills at the level they should be? Yes, while degrees do show that you’ve gained more knowledge in a specific area, these types of skills are often more important. I found this very comforting: I am very proud of my (soon to be!) degree in psychology, but I also know that I have gained many softer skills through my volunteer experiences, my mentorship and tutoring roles, and have strengthened my voice as a writer. I left that panel carrying my head just a tiny bit higher.

As I made my way into the networking reception, I had a lot of thoughts running through my mind. As someone who has anxiety, walking into a big room full of strangers (professional ones at that) was, as I said, terrifying. My friends and I moved as a pack, which was probably not the most effective way to network, but hey, I did what I had to do! I talked to a few people and loitered more, but at the end of it, I felt much calmer. I realized that as I was in the conversations, I wasn’t thinking about how the other person would perceive me, or that they were more impressive. I was just talking, with normal, real people. Yes, it was scary at first. I think I’d been hyper-focused on the power dynamic between professionals and students, and had built up the concept of networking in my head to be some insurmountable task. In reality, it’s just about making connections, finding common threads, and being an eager listener. Which are the same foundations of any other conversation. I’m trying to be better at reminding myself that I do have skills and I do have lots to offer, and after hearing what the alumni said, I think I’ll feel more confident in a networking setting. Now, I still have a long way to go before I can comfortably stroll into a room of strangers and rattle off my elevator pitch without batting an eye, but the Next Steps Conference showed me that networking doesn’t need to be scary, and we’re all capable of doing it if we just give it a shot.