It’s officially 2019, which means it’s that time of year where we start going after those New Year’s resolutions and hope we don’t give up before February! One of my resolutions for this year is to exercise at least three times a week. In the past, I’ve been known to opt for the general “exercise more!” resolution that most of the world also shares. Now, I’ll give myself an A for effort, but beyond that, it’s a pretty terrible resolution. Why? Because it is so vague! Does walking up a flight of stairs count as exercise? (I wish I was letting myself off this easy, but alas, I’m trying to hold myself accountable this year.) So, when I was debating if I wanted to do the whole resolution thing this year, I decided I would only do it if I could make it specific and if I came up with a plan. I found three chunks of time during the week when I could absolutely make time to hit the gym or a drop in fitness class at the Athletic Center and so far I’ve actually stuck with it! (I know, I’m surprised, too!) The first class I’ve tried was Fit Mix-Interval Training and let me tell you, it kicked my out of shape butt.

We used the box step equipment pretty much entirely throughout the whole hour. Stepping up and down off a box doesn’t seem like much, but there were a few points where I was doubled over and panting, hoping my heart wouldn’t stop dead in my chest from overwork. I don’t know if that’s more a testament to the rigor of the class or to my lack of physical endurance, but either way, I was sweating-a lot. The instructor paired the class with really upbeat music and the class was synchronized in our stepping, so the whole thing was really cool to be a part of! She also had us use two different sets of dumbbells. We did lunges and squats, which also incorporated the box. Let’s just say walking down the stairs to the locker room afterwards was not an easy task.

Although the class kicked my butt, I felt really good afterwards. Could have been the endorphins, but I also felt a great sense of accomplishment. There’s something really gratifying about setting out to do something and then actually completing it, especially in terms of your health. Working out used to seem really daunting to me, but experimenting with different modes of exercise allowed me to discover that group fitness classes are more my type of workout. Luckily enough, the Athletic Center, Goldring Centre and Hart House all offer great drop-in classes at different times of the day, which is going to be really helpful for me if I intend to stick to my resolution. Now, I don’t know how I’ll be doing with my three day/week goal come February. But I do know that I will be going to that class every Thursday and that in itself is a big step in the right direction. 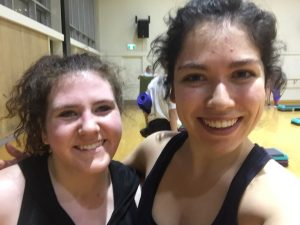