Between classes and studying this past Monday, I heard about the event, “Our City, Our Future: Students in Conversation with Jennifer Keesmaat,” held by the Urban Studies Student Union (URSSU) that evening.

As someone (maybe the only person) who’s interested in municipal politics, I jumped at the opportunity to hear one of the mayoral candidates speak to our student body.

I met Ms. Keesmaat briefly a few weeks ago at the UTSU Street Fest, though I wanted to know more about this budding Toronto personality. She previously held the position of Chief City Planner and has an extensive background in urban planning, so many urban studies students were present that night, but also patrons from the larger Toronto community. 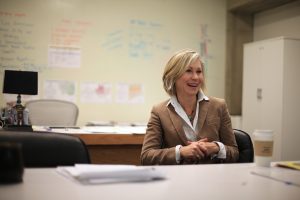 On Monday my lecture ended early, leaving me a two-hour gap before a meeting that evening. So, I marched up to Innis College and was astonished by the dense line of event-goers that weaved around the newly renovated lobby.

I came to the URSSU night sans registration and just waited till the end when the event planners had extra seats to fill.

Upon returning home my roommates asked, “Would you vote for her?” I’m not quite sure. But this is the type of exposure to the democratic process that I crave. Opportunities that I feel are being handed to us on silver platter at this institution. (Ok now you really think I’m a keener, but politics are important).

In closing, I’ll reiterate one of Ms. Keesmaat’s most pressing points in relation to youth participation. Whether you’ve just arrived in Toronto, or you’ve been here your whole life, these municipal issues affect YOU. From subways to bike lanes, to affordable housing— we get to decide this city’s future.

The Toronto Municipal election of 2018 is scheduled to be held on October 22, 2018, to elect the mayor of the City of Toronto.

0 comments on “The Event Chronicles: URSSU and Jennifer Keesmaat”