The Cold Never Bothered Me Anyway: Winter Commutes to U of T

Back in the summer, I wrote about surviving the summer heat while being a commuter. Rachael’s covered the campus winter life hacks, but in light of the recent snowmageddon that was unleashed upon the city (possibly a mild exaggeration), I knew it was time for: The commuter’s edition of surviving the winter!

If I’m being honest, I’ve been that person who didn’t wear a hat because I didn’t want to mess up my cute hairdo. No one likes dealing with the bulkiness of winter clothing, especially if you’re alternating from bus to train to sidewalk during a commute. I try to look for items that keep me warm without all the bulk. Fleece-lined gloves, earmuffs, headbands, and even better insulated shoes and jackets have helped me stay warm without looking like the Michelin man (and they even keep me warm without messing up my hair!!)

2. Transit will be a mess. Accept it. Embrace it. Prepare for it.

I’ll admit, I get irrationally angry when the train gets delayed during storms, or when streetcars aren’t in service because of snow, but I know it’s impossible for transit systems to anticipate and prepare for everything that comes along with crazy winter weather. Staying updated, leaving early, dressing warmly and having a game or book as a distraction are all things that keep my spirits a little higher during delays. This handy TTC updates Twitter and the GO Mobile app have (relatively) up-to-the-minute information. I also have a tactic of leaving around times that the subway won’t have as much people. Pro-tip: Half past the hour is usually the least crowded time at the stations near campus because classes tend to finish on the hour!

If you’re able to, stay home! Poor visibility, slippery roads and just an overall mess of wetness make for pretty treacherous commutes already. Combine that with the generally bad traffic downtown and it creates pretty dangerous conditions. I’ve been caught driving in some pretty terrible storms and I can confirm that it’s difficult enough to see the car in front of me, let alone the people walking around them. I’ve emailed professors or TA’s and they’ve generally understood the situation, and thus the self-declared snow day was born.

It’s easy to get frustrated during cold, harsh winters, but it does have its upside. Imagine walking through the fresh snow on St George St. Possibly stepping out onto King’s College Circle and seeing the skyline blurred by the snow. 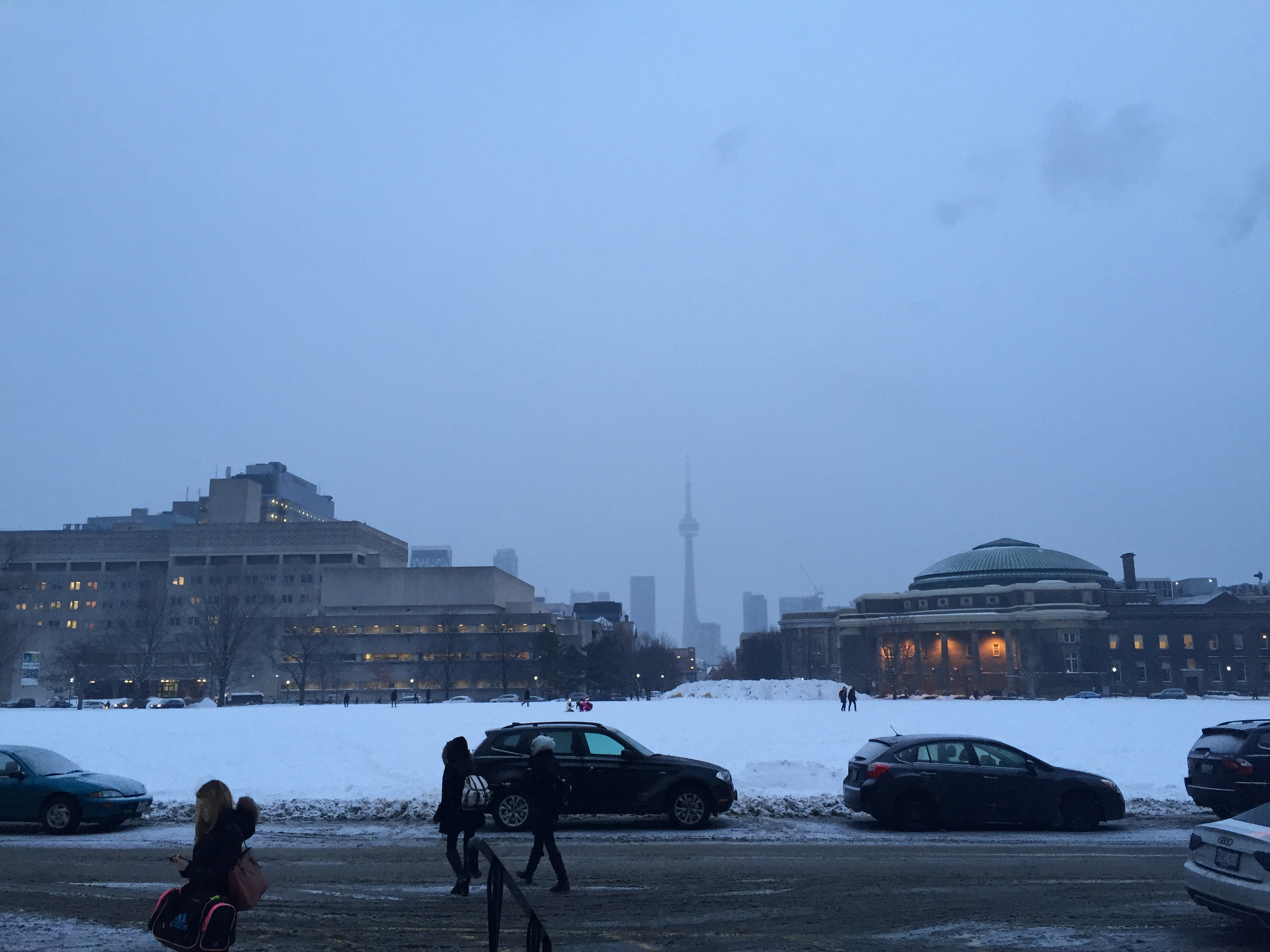 Perhaps the upside could even be a U OF T SNOW BATTLE?

So tell me U of T, how do you cope with commuting in the winter?

0 comments on “The Cold Never Bothered Me Anyway: Winter Commutes to U of T”