Your Name in Lights: Auditioning for UTTV

I’m sitting uncomfortably on a stool, while a camera with a blinking red light stares at me mercilessly.

“Do you have any video editing experience?”

“Do have any onscreen experience?”

“No… Wait, I was like, a news anchor in elementary school. For like, this community TV thing, I think it was called HTV, maybe, or something. Something. It was definitely called something. Oh, it was in California. Because like, that’s where I’m from. Oh, and I like… interviewed teachers… and stuff… I don’t know, I was ten.”

I can tell that I’m kind of stammering, but I try to make up for it by smiling a little bit wider. Then I remember that in that theatre camp I went to in the seventh grade, they told me not to smile so much in auditions. I instantly stop smiling. But oh, I’ve been told that I look mean when I’m not smiling. I settle for what I hope is a “pleasantly neutral” expression. (The last time I had to audition for anything at all was in my senior year of high school when I auditioned our drama club’s production of Footloose. I was in the chorus.)

Three of the executives of UTTV are sitting behind a desk in their office in the Sussex Clubhouse watching my internal struggle.  I noticed a flier for their upcoming open auditions in the Koffler Centre, and decided that I wanted to try to get involved with U of T’s only broadcasting television (Youtube) station. UTTV does some really fun things, broadcasting online to their website and youtube channel, from news shows, to interviewing students on the street,  It’s not exactly CBC. (UTTV hosts a reality show called Sudden Death Lockdown in which students are locked in a room, and systematically voted out of the room until there is only one contestant left. I’ve watched approximately 15 minutes of it, and it’s a more nuanced study of human nature than even the reality-show classic, The Jersey Shore.) But then again, it shouldn’t be CBC. The programming is at its best when it’s self-referential and tongue-in-cheek.

But I digress. I manage to stumble through the rest of the interview with only a few minor mishaps. No, I don’t know what kind of show I’d like to be on. Am I an actor? *Nervous laughter* Oh God, no!

(Here’s the general mise-en-scene. Although, I was probably approximately 100x more awkward than this girl.)

But despite it all, I still got an offer to work on a new show through UTTV. (If you’re interested in seeing YOUR NAME IN LIGHTS yourself on a Youtube channel, contact them right away, or go visit room 423 in 21 Sussex.) They’re in the process of developing new content, and they always conduct free editing tutorials for all U of T students.) I won’t be acting (thank God), or singing, but they liked me! They really liked me! (And with Oprah out of the picture, I should have the inspirational talk show market CORNERED.) 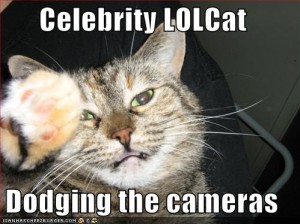 And then my life will be just like that celebrity lolcat’s.

Anyway, before I sign off for today, I want to share a little bit of wisdom that I’ve accumulated throughout my years at U of T. And I’m going to let Woody Allen say it for me: 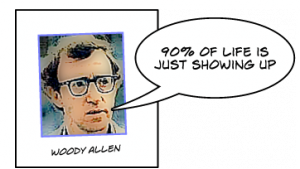 And 70% of success is knowing where you should be showing up. And to that? I credit flyers.

THINGS THAT HAVE CHANGED MY LIFE, THAT I ONLY FIGURED OUT EXISTED BECAUSE I SAW A FLYER

1. The Hart House Finnish Exchange. I saw a flyer and applied. Ended up living in Helsinki, Finland for a summer, and it was one of the greatest experiences of my life.

2. The Varsity. I saw a flyer advertising an open house. I went. Somehow, I ended up working there (practically living there) for the next three years as a writer and an editor. It has defined my university life.

3. Book and Media Studies. One of my majors. I only knew it existed because I picked up a flyer about it in the Kelly Library.

Getting involved is nerve-wracking and awkward. It’s scary. (I remember pacing outside of The Varsity office before I had the courage to walk inside for the first time.) But the great thing is, once you’re in, you’re in, and the more you force yourself to do things outside of your comfort zone, the easier it gets.

1 comment on “Your Name in Lights: Auditioning for UTTV”