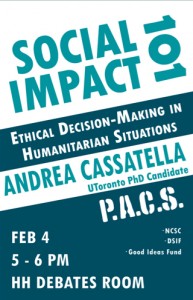 One of the things that I resolved to try this school year was to attend lectures and seminars offered at U of T that weren’t necessarily related to my subject of study. Luckily, this resolution was much easier to keep than my New Year’s resolution (exercising is hard to do in the morning when my body refuses to wake up unless I’m going to be late for school!).

A friend of mind told me about Social Impact 101, a lecture series hosted by the Peace and Conflicts Society (PACS). This series is designed to help you improve your leadership skills for social impact. After a brief 10-week stay in Kenya two summers ago with Students for International Development, I learned, truly, how privileged we are to be able to go to school in Canada. This experience added a new dimension to my career goal – yes, I still want to be in business, but I want to work for (or own) a company that will also give back to the community. When I heard about the series, I didn’t have to think twice to register.

Every week from 5-6 (the day changes), PACS brings NGO executives, private consultants and management professors to speak about their expertise on leadership in the social and humanitarian sectors. For the past two weeks, I had the chance to hear from Cheryl May, Social Innovation Lead at MaRS, and John Monahan, Executive Director at the Mosaic Institute. I had a blast! Both speakers had their own styles of course, but they both engaged me during their presentations. I found what they had to say to be useful and practical, and the case study exercise that I participated in after the speaker finished supplemented the presentation by applying the things we learned to a real-life problem. There’s even a prize the following week for the group that comes up with the best solution!

If you go to six of the eight lectures, you’ll receive a certificate at the end! This coming Thursday is the third, so you still have time to get the certificate if you’re interested. To learn more about this speaker series, I spoke with Michael Beeler, Co-President of Peace and Conflict Societies.

1) Can you give me a brief intro to the PACS Society and your role in it?
The Peace and Conflict Society is one of the smallest course unions at U of T, but in recent years has been one of the most active in organizing large events for students across the University of Toronto. Since 2006, PACS has organized four major conferences with a cumulative total of over 1000 delegates, over $200,000 fundraised, 200 guest speakers – including keynotes such as Gareth Evans from the International Crisis Group and Louise Frechette, former deputy UN Secretary General to Kofi Annan. The society has punched above its weight for years because the program attracts incredible students who are admitted through an interview process that takes into account not only academics but leadership experience and potential. I’m currently serving as the Co-President of the Society along with Jeremy Vernon.

2) Why were you interested in doing a speaker series?
We wanted to host Social Impact 101 because many of us want to take what we learn in the classroom and apply it to make change in the real world; but few of us feel that our courses imbue practical knowledge about how to affect social change. Based on the incredible turnout so far, it seems many students across the University also want practical knowledge about how to innovate, lead and make a difference in society, and not just how to write lit reviews and lab reports – although those are also important skills.

3) Who is this series for? What do you hope the audience will gain from attending the series?
The series is open to everyone and anyone. Students, profs, friends, family, strangers – whoever in the public is interested in attending. Most participants are students who want to be involved with or create their own non-profit organizations, but I have also met some graduates and a high school student at the event.

4) The 8-part lecture is free – which is great – but how did you find such awesome speakers and keep the lecture accessible to everyone?
We received $1000 from the Dean’s Student Initiative Fund, $500 from the Hart House Good Ideas Fund, and $600 from the New College Student Council. This allowed us to attract speakers with an honorarium, provide pizza, certificates, prizes for case competitions, and the like. However, our first two speakers indicated that they will be donating their honorariums to charity. Most speakers come from within the Peace and Conflict Society’s existing social network; we also received help from Students for International Development in getting speakers from the NGO community. In all cases, we’ve relied on local speakers to keep costs and our carbon footprint low, but since there are so many incredible people in the GTA we haven’t had to compromise on quality.

5) Given its success so far, what are your plans for the speaker series in the future?
Our hope is that by documenting the strong turnout and popularity of the event we will be able to convince the University to renew our funding so we can offer the course next year, with a number of improvements: a better-organized case contest component and perhaps a grand prize for teams that develop social innovation proposals over the course of the series.

As the poster above says, this Thursday we have Andrea Cassatella from U of T to talk about Ethical Decision-Making in Humanitarian Situations. I’m looking forward to going again, as well as enjoying the free pizza! Be sure to go early if you’re interested, because there were more than 90 people attending the first day alone! Email si101[@]peaceandconflict.ca to sign up for the course. Hope to see you there!