How To Get Peed On Twice In One Day

Okay, so it wasn’t me who got peed on twice in one day, but it was still fairly amazing: seventy-two hours into the fall term of ’09, and I was standing in class in the middle of deciduous old-growth bush, 100 kilometers outside of Toronto, staring at a grey and warty toad whose fingers were roundly punctuated with fat, circular pads. The poor little tyke had just peed on our prof’s hand, having been carried around and shown to the entire class as we grappled with measuring tapes and flags in the middle of the forest, halfway down a rather steep hill. 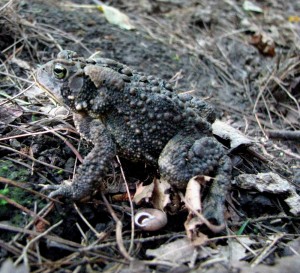 Welcome to a U of T field trip to the Koffler Scientific Reserve, the largest deciduous old growth forest in Ontario. Not at all how I had pictured my return to school, but far from disappointing. And the rest of the day proved no less interesting: the first part of the trip was designed to help us with our tree recognition, so we hiked through the old Koffler estate, stopping periodically to investigate the leaves, bark, and branching of various species. Before Saturday, I couldn’t have described the difference between a silver and a sugar maple, and had never even heard of ironwood. After hiking through the woods for several hours, however, my tree list began to grow; red oak, red pine, black cherry, eastern hemlock and trembling aspen.

After measuring and sampling species variation and gasping at the number of burgeoning mushrooms (the colours, the shapes, the delicate little gills!), we stopped for lunch in an old abandoned field undergoing secondary succession and discussed nematode extraction in the Netherlands, debated whether or not worms are a indicator of environmental health, and in the tall grasses I found a number of European mantids, apparently enjoying the end of summer. 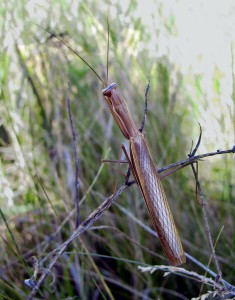 The trip’s piece de resistance occurred right at the end of the day, when, making our way back to our happy yellow school bus, the prof got peed on for the second time. Initially there was a sudden and widespread shriek from the front of the group. Clustering around the her, we saw she had in her hands a wild Common garter snake, which writhed a little and subsequently peed, a fantastically fetid smell that works as a defense mechanism, and was, as a consequence of her being the bravest teacher I’ve yet to meet, all over the prof’s hands. 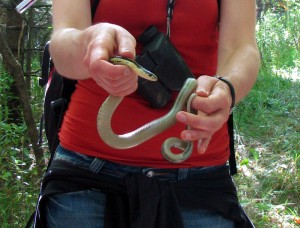 I was altogether shocked by how much I enjoyed the field trip, and it wasn’t just all the peeing, especially considering that there are a number of other professors whom I would much rather have seen peed on, a topic I will obligingly have to leave for some other time. No, my aim here is to broadcast how great it was, just in case there are still students who have been considering picking up another class or changing their courses before it’s too late, or for those looking to modify their coarse load in January, when a whole new set of field trips is offered.

To name just a few (we’ve all seen too many course codes recently, I’m sure), ENV234 offers bi-weekly field trips, with destinations ranging from Joker’s Hill to Toronto Brickworks. A bunch of Ecology and Evolutionary Biology classes offer them as well, like EEB322, EEB386, and EEB331, as do some other departments, such geology (GLG206, GLG318) and forestry (FOR305, FOR307).

So why am I trying so hard to sell field trips? For one,  statistical methods that had previously escaped me actually started to make some sense when I did them halfway down a hill: getting out and doing scientific and statistical work isn’t only a whole lot more fun than reading about someone else doing it in a 400-paged textbook, but helps you fathom, in a concrete fashion, what those disciplines actually involve. Also, thinking of returning to class over my summer holidays, I pictured myself, for the subsequent eight months, buried deep in the vaults of university libraries, hunched over the books piled high on my desk, back cracking, eyes bulging, head ominously stuffed. I never expected to find myself in the middle of the bush, touching snakes, sitting among mantids, experiencing firsthand scientific theory; nor expected to be living the word canopy, standing right below a ceiling of green leaves, vying to see those at the very top. 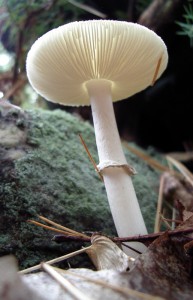