Have you been to 1 Spadina Crescent?

I went once last year. On a random day. It looks ghostly from the outside, and I felt like an intruder (as it was particularly empty at the time). In first-year, part of me still wanted to switch my undecided minor to Visual Arts. Yeah, like anything’s changed, bwah ha digression ends.

1 Spadina Crescent is U of T’s mysterious fine/visual art stronghold. I sometimes forget we have one. There is also the inclination to believe U of T’s interpretation of art to be that of the pretentious, stuffy, expensive and redundant kind. NOT SO!

I hope, anyway. But, guess what! Next Thursday begins U of T’s 2009 “Celebration of the Arts” Week/Event/Thingamajiggy! And, guess what again! Because it begins next Thursday, I have nothing to report! For once, I can tell you of an event… (gasp)… before it actually occurs! 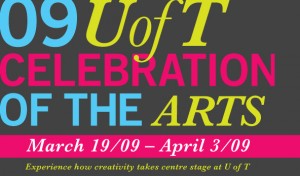 There promises to be the unveiling of U of T’s “best kept secret,“ that being… oh. That being U of T’s entire artsy prestige. Guests get to go through and observe the studios of the creators/professors on what looks like a ‘speed dating’ basis. There will be a brass instrument involved. It will be more lively than this paragraph. It’s FREE. Most of the events are. The most expensive were… $25 (for non-student adults); one being a music performance called “Earth, Wind and Fire.”

With fifteen minutes* left to end this vagueness, here’s everything that looks like it will be cool, from the posted event schedule. This is, of course, not a complete transcription. That would be redundant and mad. Or moreso.

Happily Queer After: All Week! And beyond, it seems, at Hart House
INTERACTIVE visual art! FREE!

Traveling Music: Mulatu Astatke & The Genesis of Ethio-Jazz: 19th
In a Walter Hall of some sort, in an Edward Johnson Building of some kind… oh wait, it’s a lecture. On music! And it’s still FREE!

Open Dance Class: 20th, 27th:
At a complicated location you are better off checking the schedule for.
“Folk dance with Balkan emphasis!” FREE the first time, then 6 bucks.

You are better off checking the schedule for everything.

Ooh! The Shape of a Girl, and The Abridged Adventures of Ali and Ali in the aXes of Evil: 20th – 22nd
That sounds pretty bada- I mean… pretty… mal-derrière… Produced by those in DRM402.
EERF!

Hart House Film Boar Screenings, and John Porter’s Super 8 in The Chapel: 21st – 23rd
Is that an appropriate place for a Super 8?!
eerf.

Spring Wake Up! 21st
Fun stuffs for the childrens in the Hart House Great Hall!

Influency: A Toronto Poetry Salon. 25th
I have always wanted to hold a salon… (suddenly realizes she has a theme for her birthday party next week.)

UTSC is holding a Buddhist Film Series, and UTM has a crazy dance party thing. Curses!
–

Why can’t you behave?!

Maybe I’ll see you there. You won’t see me, of course. Ha ha.

1 comment on “Arts Week, Next Week: uft haz artz o i didnt no”