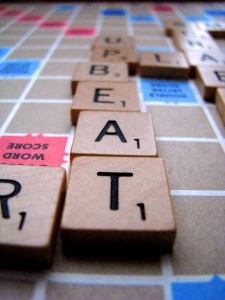 On the board there’s one E to work with, and it sits directly next to a triple word score. Holy cow.

There must be something better I can play.

There are a variety of reasons why I love scrabble. First and foremost, you can play it in a pub and pretend you’re getting smarter while drinking beer. Second, you can actually get smarter while you play by learning how not to spell words when you get challenged on your spelling (unfortunately losing both the challenge and your turn). Third, due to the types of people who play Scrabble, it is the type of competitive game that rarely ends in violence. Fourth, there are such things as Scrabble Marathons.

When I went to my first Scrabble marathon, it was in a little pub on Bloor Street with a bunch of friends. These guys were the organizers. As far as I could tell, the tournament involved a lot of chair shifting. When one table of players finished a game, its players stood, dispersed, and moved to other open tables. The games took place over a panoply of finger foods and drinks, which likewise seemed to rotate around the room at random. Although a few participants stared only at their letters, the rest of the crowd was pretty relaxed and the room was filled with light conversation. Topics included such tips as the best two letter words to use to stump your opponents. (These included a number of highly dubious “words” like BA: the eternal soul, from Egyptian mythology).

The reason I bring up such marathons is that U of T is having their own Campus Scrabble Night this month, hosted by Frontier College, an organization that promotes literacy across the country. The marathon’s happening on Thursday, February 26, from 6:30 to 9:00, in University College’s Junior Common Room, aka Diablos Café.

The idea with the Campus Scrabble Night is that you sign your team of four players up beforehand, by getting in touch with Renée Pang (reneepang@gmail.com). Each player donates $5 ($20 per team) and collects pledges to help raise money for local literacy programs.

Like me, you might not feel all that comfortable going around collecting money from family, friends or strangers (for the very keen), even if for a good cause. Or you might work on Thursday nights and thus are feeling a little mopey that you won’t be able to make it to one of this year’s better events. Do not fret: there are other Scrabble nights around, and there are lots of other Scrabble groups. For example:

These guys are impressive because they have their own website, The Toronto Scrabble Club. But you either have to live way up north in the city or be willing to travel miles (Bathurst and Sheppard) to play.

This group, on the other hand, which also has its own website (a lot more fun to play with- note the sugar cubes), also hosts [free] scrabbles tournaments, among an assortment of other games, at the Drake Hotel on Queen West. While the Drake can sometimes be a little irritatingly trendy, the games nonetheless do look really good, like Games You Play Standing Up: aka group charades.

When I take a minute think about it, it entails a lot of hard work to not want to try this out.