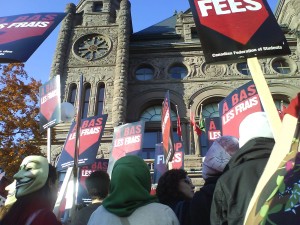 I am still slightly frazzled upon returning (to the library? Not like I was here before) from the rally. I’m not even sure why, as I was not one of the can’t-imagine-how-hard-they-must-be-working organizers keeping students in the right spots, handing things out and straining their voices for this worthy cause, among other things. Umm… you did go to the rally last week, didn’t you? You at least heard of it, right?

I’m joking, you probably did. For the sake of redundancy, on November 5th, students participated in a province-wide call to drop tuition fees. This is a spur of the moment documentation of the event, so hopefully I won’t screw up any of the facts, but the rally was held by the Canadian Federation of Students, and student unions from all different factions lent their voices to the cause and all that cliché-sentence structure jazz. I’m really not doing justice to the rally or the campaign.

So, please tell me you went or had a good reason not to go. Because, trust me, there are plenty of places on this planet where people can’t come together and demand their needs be met without being shot at.

I got to the rally a little after 12 pm, when it was situated by Con Hall. Its size had yet to reach ‘intimidating’, which it did a couple of minutes after I began to compulsively take as many pictures as I could of the colourful, button-laden, black and red sign totting, chanting students and giant banners (and shade-wearing security). My overactive imagination for some reason was expecting an angry, angry protest that could/would result in tear gas, police sticks, conduct reports and Mother yelling “HOW COULD YOU JOIN A MOB”, but the music and cheering made me feel more at ease. No one was going to pull out the Transformers.

I managed to find some friends, and offered to help hold up the “Education is a Right” banner. This would later mean madness. But before that, I was informed by said friends that I had missed an apparently larger congregation at Sid Smith (as the event began there, at 11:30 a.m.), as well as free buttons and t-shirts. Nooooooo! But that was okay, because I had actually made it there before the crowd left. Various factions were handing out leaflets, and it was clear many different groups had shown up to campaign along side the students. I at the moment can’t find the card, but I learned CUPE is the apparent union for our good ol’ TAs at U of T and guess what? They’re teed* off too!

I really am frazzled, if that’s the best information I can provide to you on the other groups present. As much as I hate people using the ‘should have’ chastisement on me, this is why you should have gone. Hypocrisy!

The loud crowd began to move, guided by student leaders with megaphones and lead vocally into chants. My favourites of the day had to be “THIS IS THE DEBT THAT NEVER ENDS. YES IT GOES ON AND ON MY FRIENDS” and “YES WE CAN” (aftermath of Obama-mania, which I will hopefully never recover from).

We went from Con Hall, past Gerstein and that dip in the road near the UTSU building, going east, I think. The madness mentioned earlier presented itself at this point. A guy in an Obama shirt (I WANT AN OBAMA SHIRT) appeared out of nowhere and politely/frantically addressed me and the other girl, whose name I failed to learn before she left, holding the sign. “You guys need to be at the front! Follow me! Quickly!”

That is, running ensued. That is, running with a large, surprisingly weighty banner ensues. That is, running through a crowd of slow-moving, occasionally inattentive humans with a large, surprisingly weighty banner ensued. We ran from Hart House Circle to I think Wellesley and Bay, bumping into various people that did not see the relatively small, banner women coming their way. Obama Shirt Man almost bumped into one of the neon orange and yellow vested crowd herders, who turned out to be an old friend of mine from elementary school! I yelled hi to her in mid-oxygen deprived sprint. Arriving at the front, we attempted to move in the direction Obama Shirt Man pointed, to the very-right-of-the-front-of-the-crowd, only to be intercepted by Green Shirt Neon Vest Girl. “You can’t go in front of this sign, guys,” she said, as we were moving in front of the very first sign in the procession. So we moved back. “No guys, go to the other side!” Obama Shirt Man attempted to tell us. Moving behind the walking people was impossible, so we tried in front of the sign again. “You can’t go in front of this sign, guys,” GSNV Girl said, in a surprisingly not-mean or flustered way while still being kind of scary. Panic manifested itself in my brain until Obama Shirt Man and GSNV Girl made eye contact and fell in love. I mean, and found a way for us to get into the right spot. After more running, or course. 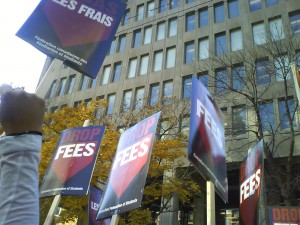 Direction evades me at this point, but we would up on a mysterious (to me) ‘Grosvenor Street’, in front of a government building. “Do you guys know what building this is?!” The woman standing on the truck at the front of the procession yelled. No one really did. “This is the (students behind me drown out the answer)”. We yelled there, including some expletives, then continued past the Toronto Police Headquarters (in which the women on one floor waved and danced from the window and this angry bald guy below them just folded his arms and looked angry) towards Queen’s Park.

At University and College, the crowd… SAT DOWN. The other girls and me stood with the sign; I attempted to sit and was crushed by the giant bag of a dude clinging to his girlfriend. But that’s okay. 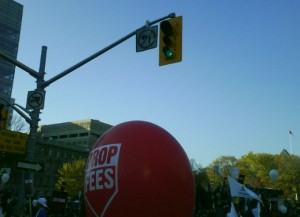 We occupied the intersection and blocked two (?) streetcars. The driver of the front-most one pulled out… his cellphone and took pictures.

The relatively large crowd continued moving towards Queen’s Park, but sadly began to dwindle after the first few speakers.

A disgusting fact picked up: at the time Dalton McGuinty was working towards his law degree, he would have paid $700 a year. Seven hundred. Today, a student would paid $20,000. (Please correct me if I am wrong.) Tuition in Ontario apparently went from being the second-lowest in the country to the second highest. My memory is telling me this was over a four year period. The rally was a blur, I’m so sorry.

No politicians inside wished to show their faces. After the crowd had dispersed, there was a whole bunch of old people from inside watching us leave!

So to sum up: you should have been there. This is what being a student should be about; expanding your mind as well as pushing for the social changes an expanded mind would know are needed.

*obvious self-censorship for the children!