Footsteps of Fatherhood: Fathering Right from the Start 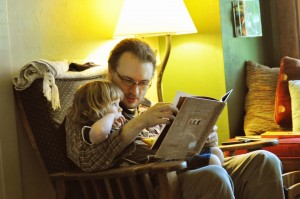 What is a father and how can fathers understand their role?

That’s where Brian Russell  comes in. Brian is a Parent Educator with the LAMP Early Years Services in Toronto and the Provincial Coordinator of Dad Central Ontario and on February 1st, he held a workshop with the Family Care Office to discuss and share experiences he has had journeying through the land of fatherhood.

For some, the idea of fatherhood breaks down to become the role of being the provider for the family, to bring in income and ensure that his child has a safe home to grow up in. But, as Russell explained, the role of a father actually goes much deeper than that.

When dads are engaged in all these ways, the outcomes are evident. As Russell says “I don’t take the responsibility of fathering lightly, I see it as a system of social change.” Fathers who are engaged with their kids have children who develop more successfully and who are two times more likely to attend post-secondary school.

The main takeaway from this workshop: good fathering footprints allow children to find their way while providing encouragement and good direction.