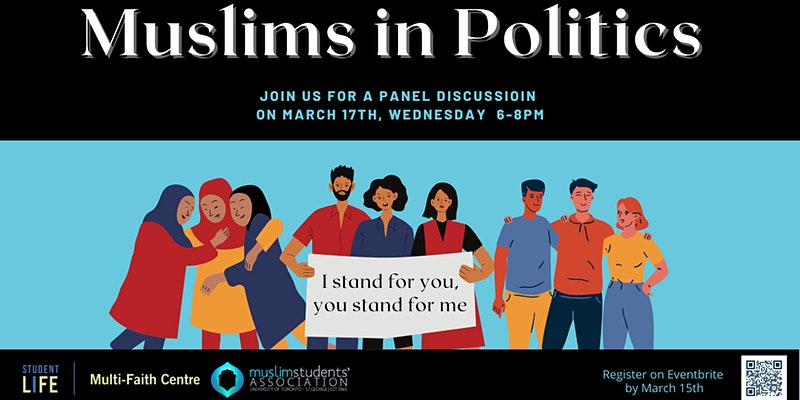 For Muslim students envisioning a career after university, making connections through community building is valuable in this process. The Muslim town halls, which are reoccurring events in collaboration with Muslim student groups and the Multi-Faith Centre, are designed with the goal of uplifting young Muslim students who are looking toward the future.

The town halls are inclusive spaces, welcome to anyone interested. That being said, as a white settler, I also attended with the understanding that the event was not directed toward me specifically. It was, however, open for me to listen and learn alongside my peers. More particularly, the event was designed for Muslim students of all religious sects to come together, discuss their shared experiences, and hear from older Muslim professionals who are brimming with advice in their specific fields. The latest session focused on politics, featuring members of Canadian parliament as the event speakers—MP Salma Zahid, MP Iqra Khalid, and Minister Ahmed Hussen. The event was coordinated by the Multi-Faith Centre, the Muslim Students Association, the Muslim Iranian Association, the National Canadian Council of Muslims, the Thaqalayn Muslim Association, and the Imam Mahdi Youth.

A commonality among the speakers was that most of them began their work in politics through grassroots organization, advocacy, and community outreach. In fact, Salma, Iqra, and Ahmed all mentioned that they did not plan for a life in politics. Iqra and Ahmed were encouraged by friends and family members to pursue politics after noticing their passion and suitability for the job. Similarly, Salma and Ahmad fell into the political world after getting involved in activism, by protesting, lobbying, and advocating on behalf of their communities. This stood out to me, perhaps because politicians are often perceived as being power-hungry and corrupt, and although this may be true in some cases,  the three panelists clearly became involved, and continued to stay involved, because of their love for bettering their communities.

I imagine that their work in politics must come from a place of love in order to endure the hate speech frequently directed toward them. I went into the discussion understanding that, as a white woman, racist hate speech would never be targeted at me. Although I knew this reality, hearing personal stories and comments from the panelists allowed me to learn, not only the extent of racism in Canada, but also how racialized politicians choose to deal with the hate.The intersection of gender, race, and religion, was especially prominent in a personal story told by MP Salma, who recalled undergoing chemotherapy after battling cancer, and made the personal decision to wear her hijab during this process. In response, she was met with racist comments, accusing her of pushing a religious agenda in Canadian politics.

Despite the violence of the comments she received, Salma responded with care, believing that we need to learn more about one another in order to battle ignorance. She recommended inter-faith learning and bridging gaps between different communities. The goal of this being that racist myths and Islamophobia cannot flourish if people actually listen and get to know to each other, rather than relying on stereotypes and prejudices to form opinions. Salma also noted that the racist comments actually motivate her, because they act as reminders that her work is important and necessary for things to get better.

That being said, Salma also acknowledged the importance of being thick-skinned, because of racism’s presence in the field. Both in spite of Islamophobia and because of Islamophobia, the speakers urged the young audience to get involved in order to make positive change. They expressed the need for representation and the value of Muslim voices being heard at the table. Iqra, Salma, and Ahmed also emphasized that they received positive emails and words of encouragement from immigrants and young Muslims, specifically Muslim women, who were inspired by their success in politics. Iqra mentioned that she consistently hears from young Muslim women that her presence and work in Canadian politics made their dreams feel validated.

In order for Canadian politics to improve, it is crucial that the next generation of Canadian politicians reflect the faces of the public. By encouraging young Muslim students to pursue these careers, spaces and events like the town halls help this dream to become a reality.