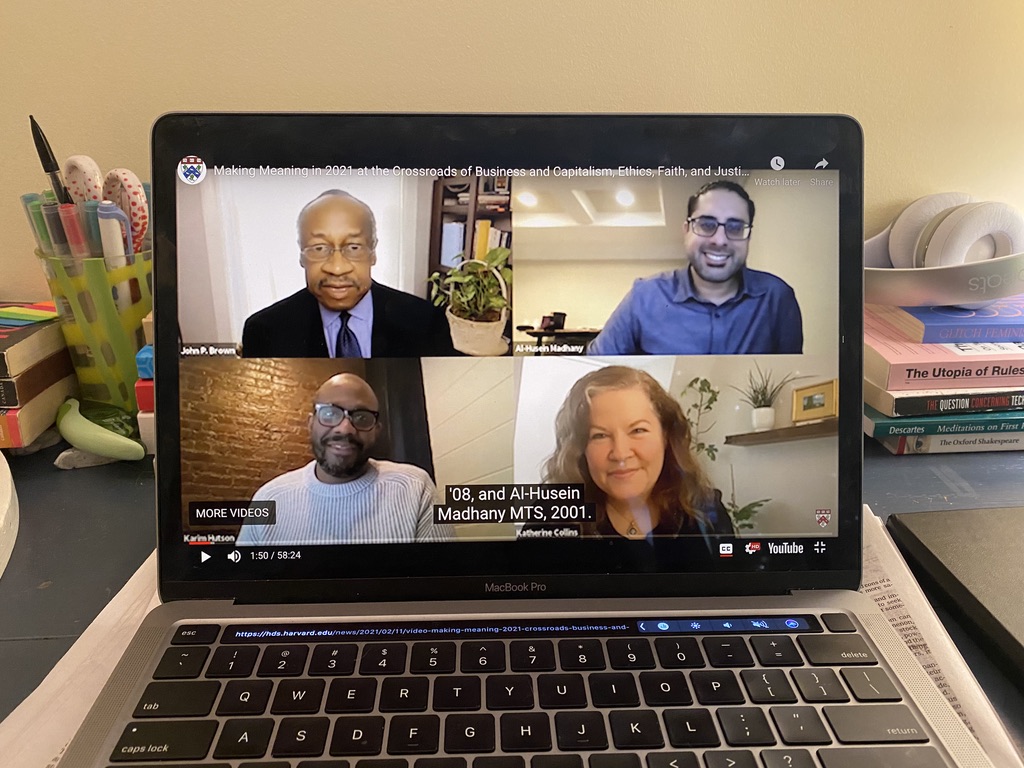 Attending Harvard Divinity School’s Event “Making Meaning in 2021 at the Crossroads of Business and Capitalism, Ethics, Faith, and Justice”

My knowledge of anything business-related is lacking to say the least, but in the hopes that I would be able to follow along with the panelists, I decided to watch Harvard Divinity School’s Event, “Making Meaning in 2021 at the Crossroads of Business and Capitalism, Ethics, Faith, and Justice”. The event grabbed my attention mainly because I was curious about how these separate subjects would intersect. The panelists were all alumni of the HDS, and had moved on to pursue business prospects, where their opinions and decisions were often informed by their faith.

The first panelist, Katherine Collins, is the head of sustainable investments for Putnam Investments. She began by explaining the importance of thinking more deeply about the corporate systems and structures business people engage in. She also described the significance of critiquing the way ethics is often thought of as being exclusive to the religious sector, and is too often absent from the business sector. Therefore, Katherine specializes in thoughtful investing. She noted that the corporate world often aims solely toward creating an effective bureaucracy, which may not mirror what individuals view as being important in the grand scheme. She commented that, “the things that fit on your spreadsheet may not always be the most relevant things to consider”. She spoke from personal experience that it’s easy to become so overwhelmed with bureaucratic minutia that you forget the larger and more important questions that guide your objectives.

Karim Hutson is the Founder of Genesis Companies, which is a development firm that provides affordable housing in collaboration with community partnerships. Karim explained that a concept from the Book of Genesis actually guided his company’s goals. In this passage, the world was covered in darkness before God created earth. However, Karim’s professor at the Harvard Divinity School had an alternative interpretation of the passage. Instead, his professor argued that this did not necessarily mean that God created the world out of nothing, but that God perfected and improved what already existed. This idea became a key principle for Karim’s business—his company does not come into communities to create something out of nothing, but rather, it focuses on building up communities to make them stronger and more resilient. Karim spoke about his experience growing up in Harlem and the Bronx, where many of his friends developed asthma from living in buildings that were constructed poorly and with unsafe materials. As he grew older, he recognized that the living conditions in these neighbourhoods could and should be improved, and so he designed Genesis.

Al-Husein Madhany made a point to describe how human beings are tired of being productized, where companies are viewing people as the product and capitalizing off of our data. He argued that we should be restructuring these organizations, with the purpose of decentralizing power, where monetary value should not be pooled in a single corporation or body of people, but rather, it should be spread out among different people and corporations. He also argued the importance of humanizing people and workers within corporate environments, and to recognize that people are more than their productive capabilities.

This led one attendee to comment that the Golden Rule in many religions can also apply to the business world, which highlights the importance of treating others how you would want to be treated. Karim agreed with this comment, but also noted that the Golden Rule should be applied outside the context of capitalism as well. For example, he argued that it can and should also apply to government officials, who tend to care more about being elected rather than about fulfilling and working towards their mission to help the people they represent. Moreover, both he and Al-Husein noted that faith communities also need to focus on conversations regarding advocacy and social justice, especially in a growing socio-political climate that is focusing increasingly on racial and political injustice.

The Harvard Divinity School hosts online events frequently. Their conversations are thought-provoking and insightful, and often focus on the intersection of faith with other communities and social structures. Although I’m not a business student (and know very little about business and the corporate world more generally), I found the discussion engaging and easy to follow along. I highly recommend checking out their website for past events that have been recorded and uploaded online. The link is below!

1 comment on “Attending Harvard Divinity School’s Event “Making Meaning in 2021 at the Crossroads of Business and Capitalism, Ethics, Faith, and Justice””