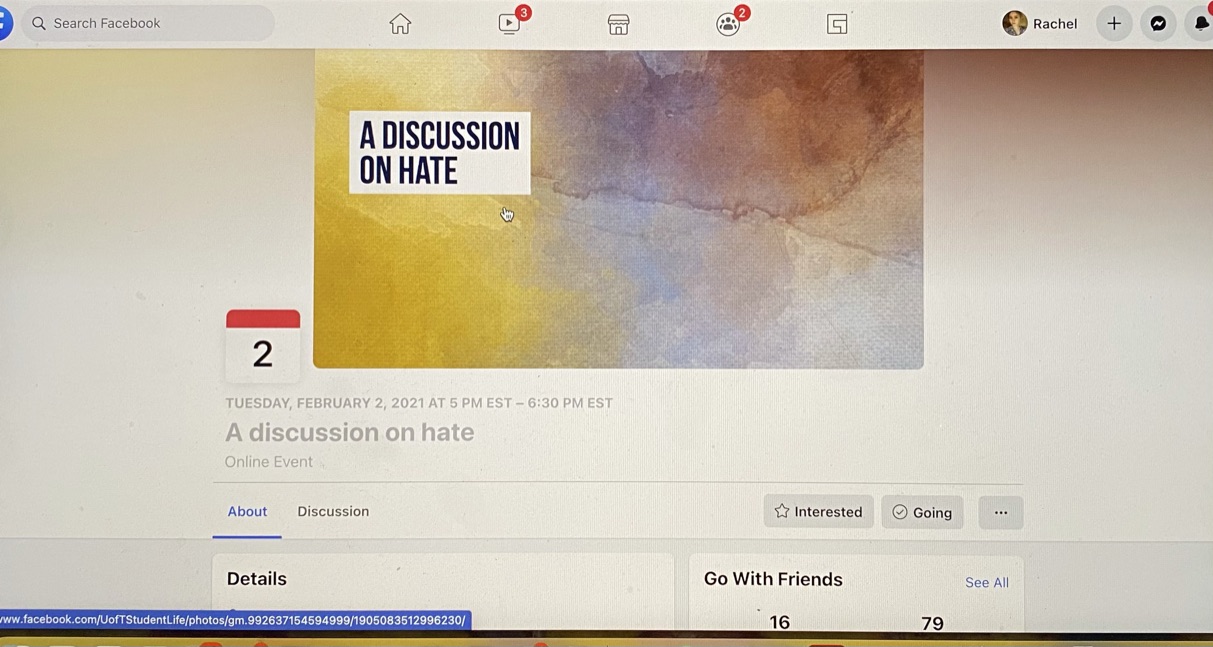 A Discussion on Hate: Learning about Hate Crimes in Canada

Right-wing extremism in Canada is often overlooked for several reasons. Firstly, white supremacy in the United States tends to take centre stage in mainstream media. Secondly, Canada’s reputation as a peaceful, friendly nation often conceals the dark reality that hate crimes have been rising on Canadian soil. The event, “A Discussion on Hate,” tackled this subject matter. The event’s panelists included Dr. Barbara Perry, professor of Criminology and Director of the Centre on Hate, Bias, and Extremism; Evan Balgord, Executive Director of the Canadian Anti-Hate Network; Mustafa Farooq, lawyer and Chief Executive Officer of the National Council of Canadian Muslims; and Dr. Catherine Richardson, Metis professor and Director of First Peoples’ Studies at Concordia University. Each panelist discussed their own opinions regarding hate crimes in Canada, drawing from their own research and the work they’ve done within this field of study.

One theme throughout the discussion was the power that police departments have in determining how a hate crime is addressed. The discretion at the hands of the police in how these matters are handled is concerning, specifically because reports that they deem to be “unfounded” are thrown away. This means that hate crime reports that are discarded by the police are not accounted for in hate crime statistics. This is especially worrying because public surveys that ask citizens whether they have experienced a hate crime find much higher numbers than police reports. More specifically, these surveys show that police are reporting only approximately five percent of hate crimes. Evan Balgord argued that, because of their consistent mishandling of hate crimes, and because of the distrust within these communities toward police, we need to find alternatives to law enforcement when searching for solutions.

Mustafa Farooq emphasized that justice and law are often conflated, but the two are very different. Police tend to enforce the law, regardless of whether the law or their actions as law enforcement agents are just. This is prominent in cases where the police themselves are the perpetrators of such violence from within the legal system. For example, Catherine Richardson pointed out that police have consistently neglected Indigenous women and girls throughout Canada. Often, the mysterious deaths of the missing women are ruled as suicides without investigation by police. Dr. Richardson suggests that hate crimes can take the form of systemic violence as well, and are not uncommon in the institutions that we expect to protect the public. She referenced the death of Joyce Echaquan, a 37 year old Indigenous woman who was verbally abused by Quebec nurses the night before she died. Racism directed at minority groups and marginalized communities is institutionalized in Canadian societal structures, and is perpetuated by individuals within the system and by the system itself.

Evan Balgord added to the discussion that, beyond institutional racism, Canadian hate groups are on the rise, despite its relatively low media coverage. Balgord emphasized that there is a disproportionate amount of Canadians contributing to alt-right extremism on the internet, and that some of the most well-known alt-right influencers spreading online propaganda are Canadian. Balgord stated that the primary reason for the lack of hate rallies in Canada compared to the United States is not becuase we have less racism. Rather, it is because of demographic factors, like population density and geography. Balgord also dispelled the myth that the people contributing to the alt-right are young and uneducated. On the contrary, many are middle-aged and well educated.

Just several days after the event took place, the Proud Boys—a white supremacist, neo-fascist group in North America, was declared a terrorist group in Canada. This is one small step forward. During the discussion, Dr. Barbara Perry stated that the threat the Proud Boys pose to Canadian society is, however, often ignored. Instead, many Canadians choose to focus on Islamic terrorism, despite its absence in Canada. The reality is that far-right extremism is much more dangerous. Dr. Perry referenced the Quebec mosque shooting in 2017 and the Etobicoke stabbing this past September as examples, both of which were deadly attacks executed by neo-fascists.

The threat of white supremacist mobilization has been growing in Canada for some time. Although the communities that are targeted by these hate groups survive by providing support for each other through acts of solidarity, community engagement, and advocacy, they still live in fear. Solutions are needed, however, they are complicated. Balgord argued that one step forward is banning alt-right voices from spaces on the internet. He noted that BIPOC figures on social media sites are often confronted by barriers while attempting to participate in politics, journalism, social commentary, etc., because of the threats they face. Dr. Perry also believed our education system needs to be improved and revised to address white supremacy and the myths being spread by the alt-right. Especially in the age of the internet, disinformation is common and increasingly dangerous. Therefore, spreading awareness and educating the public, whether through the education system or through digital spaces, is a step forward in addressing the issue. However, Dr. Perry also said that more watchdog groups, like ANTIFA, need to be funded so that hate can be prevented earlier on.

0 comments on “A Discussion on Hate: Learning about Hate Crimes in Canada”