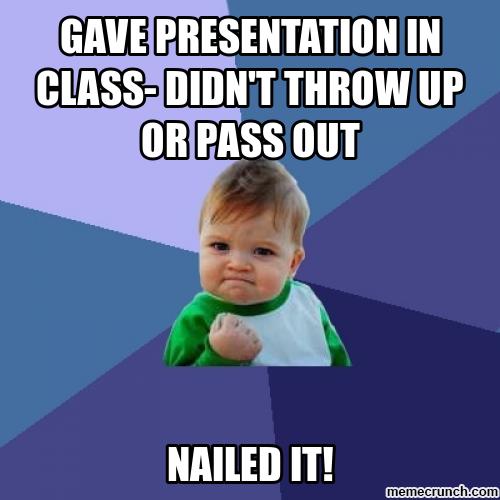 First of all: can you believe we’re halfway through the semester already?

It feels like only yesterday I was writing about Halloween.

This semester, I’ve been in a class that has really been pushing my boundaries; which typically I would enjoy, although in this case, it’s something I am very sensitive about.

Every class, which happens once a week, five individuals have to stand up in front of the class completely alone (no power point, no table, nothing), and present on the findings of a two-hour discussion had with your group.

Each week the groups are different, and nobody is allowed to present twice.

As each week passed, I knew my turn to present was getting closer and closer. As overly dramatic as that sounds, the fear and worry I had about it was growing exponentially. I’ve always had horrible nerves about speaking in front of people, but I’m capable of it if I don’t let my brain get carried away ahead of time, and I’m able to plan for it. The problem with this situation, is that walking into class nobody even knows which group they’re in, let alone who will be presenting.

In an attempt to calm myself down a little – and I admit, maybe I was hoping for a free pass – I went to the professor after class and mentioned that I was a little nervous about presenting, and asked if maybe he had some tips.

I definitely down-played the situation to him, and perhaps that’s why he basically told 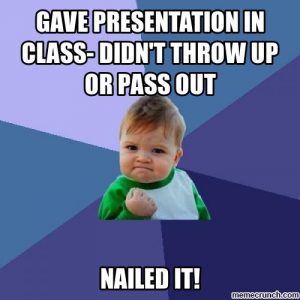 me to buckle down and present.

I don’t want to say he didn’t understand, because I 100% did not accurately describe my feelings about presentations. I could go back and elaborate to him, I suppose, but because I’m a little stubborn, that’s going to be my very last resort.

That being said, the way I’m thinking about these presentations is not helping me out at all. In fact, it is undeniably the only thing making me more and more nervous.

So, what can I do to prepare myself for when the time inevitably (sad face) comes? After talking with counsellors, parents, and going off of what little experience I have, there’s one technique experienced public speakers all have in common: Visualization.

I’m 80% sure that everybody calls it something different, so here’s a rundown: basically, you close your eyes and imagine yourself successfully doing that thing. So, what I would do is imagine myself going up there and presenting in front of the class.

I was convinced I already did this… I mean, who doesn’t imagine things happening? But the important thing is imagining the success. I would only picture myself messing up, bursting into tears, or something similar. I never even thought twice about succeeding.

I’m hoping this changes things, and I’m confident that it will; so many people have seen improvements. However, just to be safe I’m tacking on a little something extra I learned from my orchestra conductor: put a sheet of paper up somewhere you can see it, and every time you succeed, make a little mark. It’s probably important to clarify that this doesn’t mean I have to speak in public in order to make a mark. Instead, every time I imagine myself succeeding, I’ll make a mark.

Even though I’m still seriously worried, having techniques to try and minimize this has made me feel like presenting is something I can actually do.

In the meantime, do you ever get nervous about public speaking? What are some of the things you do to prepare for presentations?