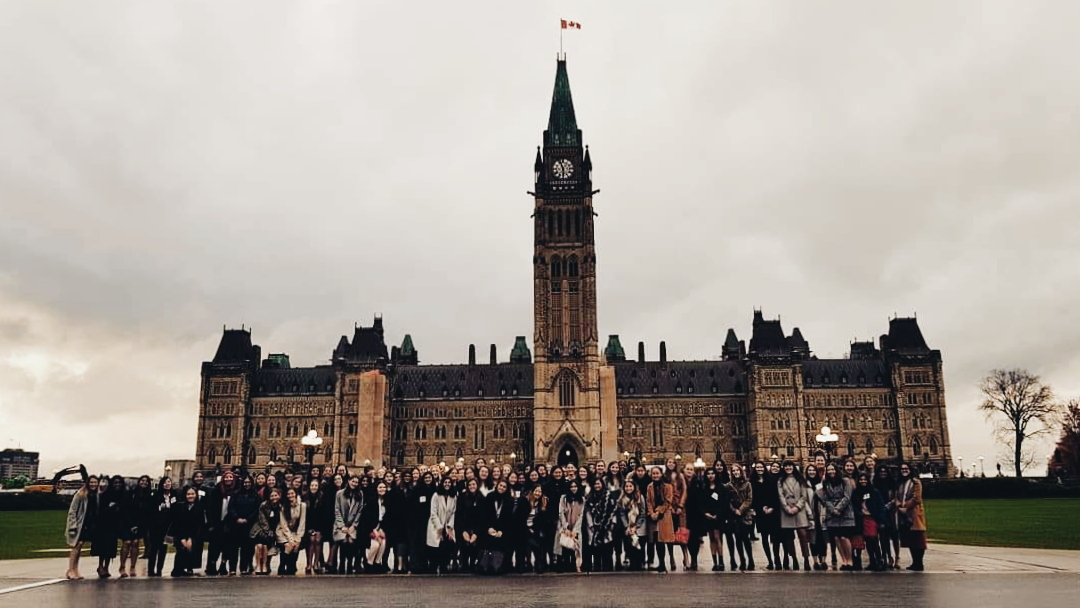 On the way, we (casually) passed Prime Minister Justin Trudeau in the hallway…

Last week, I visited Ottawa for the first time to take part in U of T’s Women In House Program under the UC Cohort. My first impression of Parliament Hill was “Wow, this looks like a giant U of T”.

Since its inception in 2013, the program started by Dr. Tina J. Park and the Honourable Carolyn Bennett, Minister for Northern & Indigenous Affairs (U of T Class of 1974) has brought together inspired young U of T women to promote greater female involvement in the federal government by shadowing MPs and Senators for a day on the Hill. As someone in STEM, this program was a crash course in politics for me – from the etiquette I had to quickly pick-up at the reception to understanding House of Commons proceedings.

After touring the Federal and Supreme Court of Canada, we had the honour of meeting Justice Rosalie Abella (U of T Class of 1967). As I imagined from law TV series, we all rose as the Justice entered. She quickly made us feel at home by sharing anecdotes from how she got involved in the law to meeting her husband at the University of Toronto.

I was surprised to find out how many women with STEM backgrounds are in House – a few of which I had the pleasure of meeting during the evening reception: Deb Schulte MP who was in mechanical and aerospace engineering and Carolyn Bennett PC MP who is a physician, in addition to my own MP, Kamal Khera who is a registered nurse. All three of them have showed me that even STEM degrees are strongly encouraged and welcomed for making critical decisions in Parliament.

The next day, I met with Sumeet, Ms Khera’s staffer in the Confederation Building and watched the first round of House of Commons. Also from a STEM background he understood that this was all new to me and he was very helpful as I tried to familiarize myself with law lingo.

At noon, I met with MP Khera and we had lunch in the Parliament Restaurant. On the way, we (casually) passed Prime Minister Justin Trudeau in the hallway. After lunch, MP Khera arranged for Chris Brittle, Deputy Government House Leader to give us a personal tour of the Senate, Parliament’s library, the memorial chamber and the clock tower.

Mr. Brittle shared quirky facts like the history behind the faces etched in the pillars (just like the ones at U of T!) as well as how a quick-witted librarian closed the iron doors to prevent the 1916 fire from engulfing the library. After the tour, we observed the House of Commons. It was much more intense to watch it in person than on a screen.

Before leaving, I asked MP Khera if there was anything she did not expect when she first entered Parliament and she said that she did not expect how much she would be away from home. Similarly, Justice Rosie shared with us how she balances having a family and a full-time career. She reminded us that “there’s no pearl without irritation (of the oyster)”.

The women on the Hill have encouraged me to be the best version of myself and to seek opportunities that will curb gender inequality in all fields. I am happy that I had the opportunity to experience the mixing of ideas on the Hill in lieu of the mixing of chemicals in my usual laboratories.