A Day at the Beach(es)

My hometown of Karachi, Pakistan is located right on the coastline of the Arabian Sea and visits to the nearby beaches have long since become a Sunday family tradition.

Keeping our family visits in mind this long weekend, I fired up Google Search and was pleasantly surprised to find that Toronto is home to some internationally-recognised beaches bordering Lake Ontario in the city’s eastern quarters.

I picked The Beaches, or The Beach, (depending on which name you prefer)- which is made up of four beaches -Balmy Beach, Scarboro Beach, Kew Beach and Woodbine Beach that stretch out across the lakeshore, curving up into an almost seashell-like spiral shape at Ashbridges Bay.

To get there, you can take the TTC eastbound to Woodbine Station and catch the 92 bus towards Lakeshore that will drop you off right at the beach. 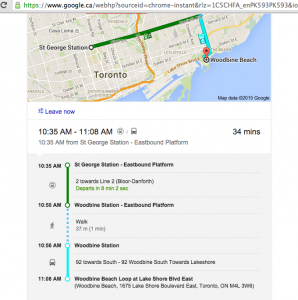 Or…you can do what I did and sit on the eastbound streetcar from Queen for…twenty-eight stops. Which sounds like twenty-too-many, I know, but the 501 is the longest streetcar route operating in North America and is a great way to catch a glimpse of some of Toronto’s unique and historic neighbourhoods.

The minute you step down from the streetcar, you’re greeted by a flurry of activity. Under the criss-crossing webs of streetcar lines is a stretch of quaint and quirky little stores along Queen Street East with colourful window displays and throngs of people making their way down the street, purchases in hand.

The streetcar dropped me off close to the entrance to Kew Gardens, a lovely little park that you have to walk through to get to the beach. It’s got towering leafy trees, pretty flowerbeds, a cute little gazebo and nature trails. 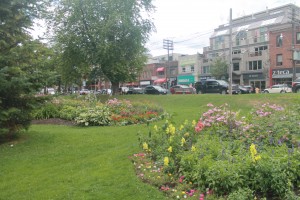 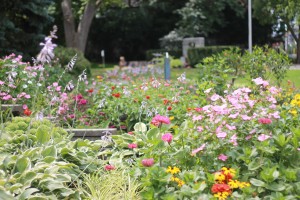 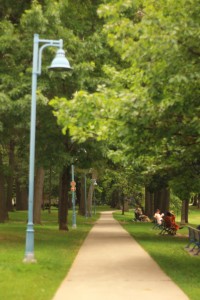 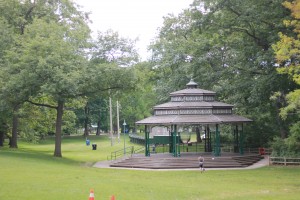 There’s also picnic benches, and a baseball diamond, filled with people playing frisbee and soccer (or do you call it football here?) and cyclists and rollerbladers whizzing by at dizzyingly fast speeds. 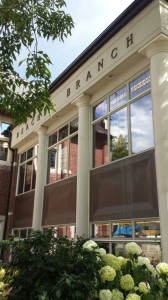 The Beaches branch of the Toronto Public Library is also nearby so you can stop by and borrow a book to read by the water (just be sure not to get it wet!). 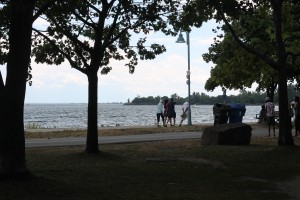 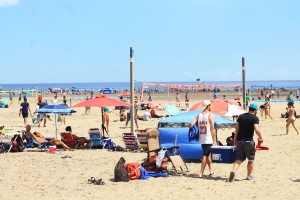 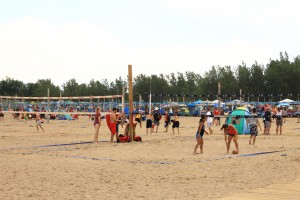 As you walk through the park towards the beach, you’re surrounded by crowds of colourfully-clad beach-goers, lots of happy dogs, volleyball players engrossed in intense matches, kids licking ice-cream and everyone just generally having a good time. I can’t think of a happier place to be on a Sunday afternoon.

There are over 90 beach volleyball courts, a bathing station, accessible public washrooms, lots of food trucks and an outdoor Olympic-size swimming pool if you’re not into getting your feet sandy (admission is free).

I’ve been told that The Beaches are a favourite destination to view the Victoria Day fireworks and also for the annual Jazz Festival as well as lots of concerts, fairs and exhibitions that keep happening throughout the year.

I only had a few hours to spare to explore The Beaches which I found far too short- there’s so much to see in the area than just the beach- take a look at this guide if you’re going to be in the vicinity.

What with it’s towering skyscrapers and the snazzy Financial District, Toronto was the last place I expected to find a charming little beach-town area where everyone wears smiles on their faces and summer clothes in varying levels of brightness.

But that’s just part of the charm of Toronto’s diversity.

One minute you can be walking alongside the immaculately-clad Businesspeople of Bay Street in their crisp suits and blazers, the next slurping ramen in the middle of chaotic Chinatown and the next, sinking your toes into the delightfully soft sand as you narrowly avoid being hit in the face by a rogue frisbee.

Spending time at the beach is also a great way get away from the hustle and bustle of the big city AND to reassure your mom that you’re taking in that Vitamin D (though not from the bottle of vitamins she bought that’s gathering dust on your shelf. sorry mom, but those taste awful!).

what’s your favourite way to beat the heat, U of T?