I visited New York City for the first time with U of T’s Black Students’ Association.

Yes, New York CITY! Not Buffalo, New York. I was in the city that never sleeps. The Big Apple. New York, New York. (Cue Frank Sinatra. I was singing that song the entire trip. I am that kind of tourist.) I took photos of myself in the subway. I pointed and stared and ooh’ed and aah’ed at everything we came across. All I was missing was a fanny pack, visor, disposable camera, and an “I Love New York” t-shirt to turn me into everyone’s favourite obnoxious tourist. I went to Times Square. Central Park. The Met. I had a pretzel from a street vendor. I went to a Broadway show (Chicago — most amazing thing I’ve ever seen in my life!). 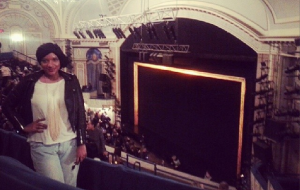 The best part of my trip?

Hanging out at the hotel and on the bus. Spending time with the 54 awesome people that were on the trip with me.

So, U of T, two amazing things happened to me over the break. I visited a brand new city, and I realized how truly awesome my #UofT family is. I really, really don’t know what I’d do without y’all.