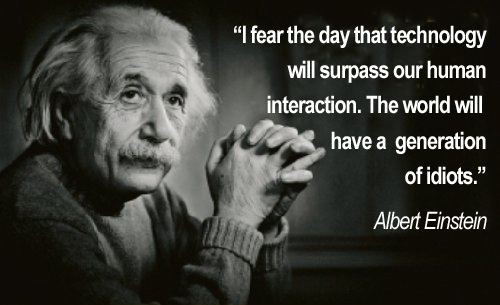 Einstein may be on to something.  We’re living in an increasingly technological world that seems to be substituting technology for real human interaction.  But rather than a world full of idiots, as Einstein put it so eloquently, I worry about a world full of unhappy, unwell people.

A recent paper based on a Canadian survey showed that there was a definite connection between mental wellbeing and friends.  Duh.  Who doesn’t know that socialization with others makes us happier and contributes positively to our overall wellbeing?  But there is a caveat.  The friends we make and keep must be in-person, not virtual.  It’s the face-to-face aspect of real live friendships that are positively linked to our happiness and wellbeing.  In fact, the paper shows that networks of online friends have “zero or negative” correlations with wellbeing.

Case in point: since I got my iPhone, I’ve found that I depend a lot on texting as my primary mode of communication with people.  It’s gotten to the point where I actually dread answering the phone and speaking to someone.  The ridiculousness of my reaction to talking to someone over the phone says it all.  Without realizing it, I had become more withdrawn, preferring this faceless form of communication, known as texting.  And while it certainly didn’t make me unhappy (texting can be pretty efficient sometimes), it also didn’t give me any value in terms of deepening my relationships with my friends – and why would I want to keep in touch with people that I wouldn’t want to foster closer relationships with?  Deciding to go to Winterlicious, on the other hand, and spend time and share good food with some close friends last week, certainly made me feel better.  Regardless of what we talked about or did, getting to spend time with them in-person and simply interacting face-to-face, brightened up my day.  In fact, our connectedness left me feeling more positive for the rest of the day.

It’s these human connections, I think, that really matter.  Apple might be on to something with its FaceTime feature on many of its devices.  And while I certainly haven’t done any scientific studies on the topic, I have a hunch that a large reason for why it’s such a popular feature is because it gives us that feeling of warmth and connectedness that’s missing from other technological methods of communicating.  But wait, here’s a crazy idea: why don’t we lose the phone (figuratively, not literally!) and just connect with friends and family in person?  Let’s get back to the original face time!

To be certain, I’m not proposing that we chuck all our electronics out the window and delete our Facebook accounts (I love my Macbook and I don’t know where I would be without my phone) but I think we need to step back from time to time and remember that technology is meant to facilitate human connections rather than become the dominate manner in which we conduct our relationships.

And although Einstein was certainly a genius, let’s try to prove him wrong on this point and show him that he has nothing to fear.

Any suggestions for great places on campus to (re-)connect with friends?

0 comments on “The Einstein Prophecy”